Frank Zappa, Laurie Anderson, Elvis Costello, and other artists have compared writing about music to dancing about architecture.

That’s what it feels like attempting to put the experience of seeing Sleater-Kinney and local legends Wilco’s Aug. 28 performance at Pritzker Pavilion into words. The Chicago stop, which marked the end of the groups’ 2021 It’s Time co-headlining tour, was cloaked in euphoria as fans basked in the joy emanating across Millennium Park.

The concert found Sleater-Kinney smack dab in the middle of a hometown hero sandwich as Chicago’s own Nnamdï was on-hand to kick-off the evening’s entertainment. “Perfect in My Mind” and “Flowers to My Demons” – featuring an intricate drum and bass jam lead-in to a full band explosion – were highlights of the Brat musician’s set which warmed things up for Sleater-Kinney’s performance. 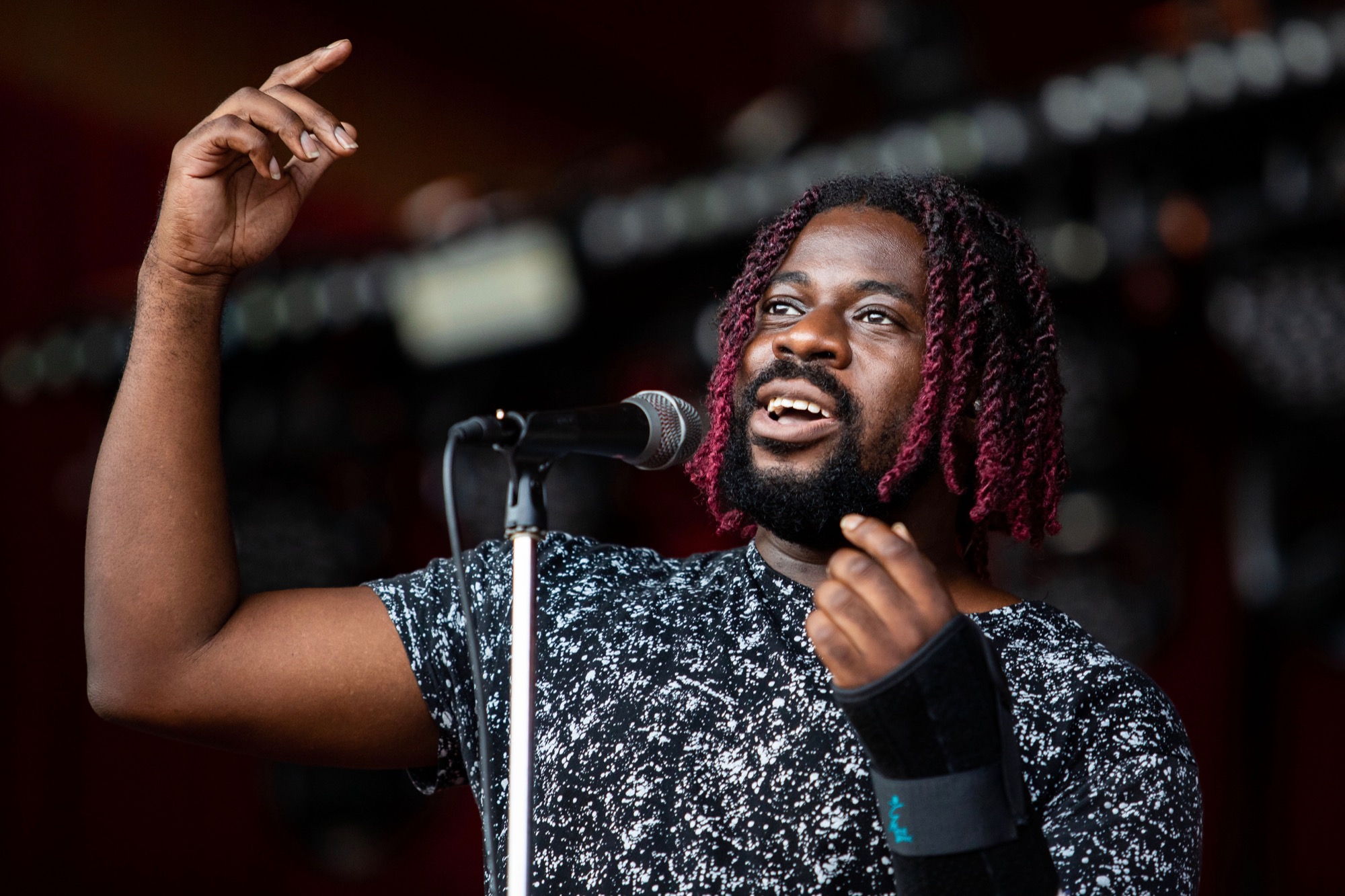 Nnamdi performs at Pritzker Pavilion in Chicago on Aug. 28, 2021.

“Thank you, Chicago. We are so happy to be here,” Carrie Brownstein said early on before Sleater-Kinney plowed through a blistering rendition of “Hurry on Home.”

She soon added, “It is truly a joy to play live music again.”

Both Brownstein and Corin Tucker were having as much fun as fans were throughout the night. In order to “communicate and commune” in the best way possible, audience members were encouraged to abandon their seats, rush to the front of the stage, and dance their hearts out for the entire set. “Can I Go On,” during which Tucker displayed humor and range with a cast of vocal personas, “One Beat,” featuring a tambourine guest spot by Brownstein’s Portlandia co-star Fred Armisen, and a tear-evoking rendition of “Modern Girl” were among the set’s many highlights. 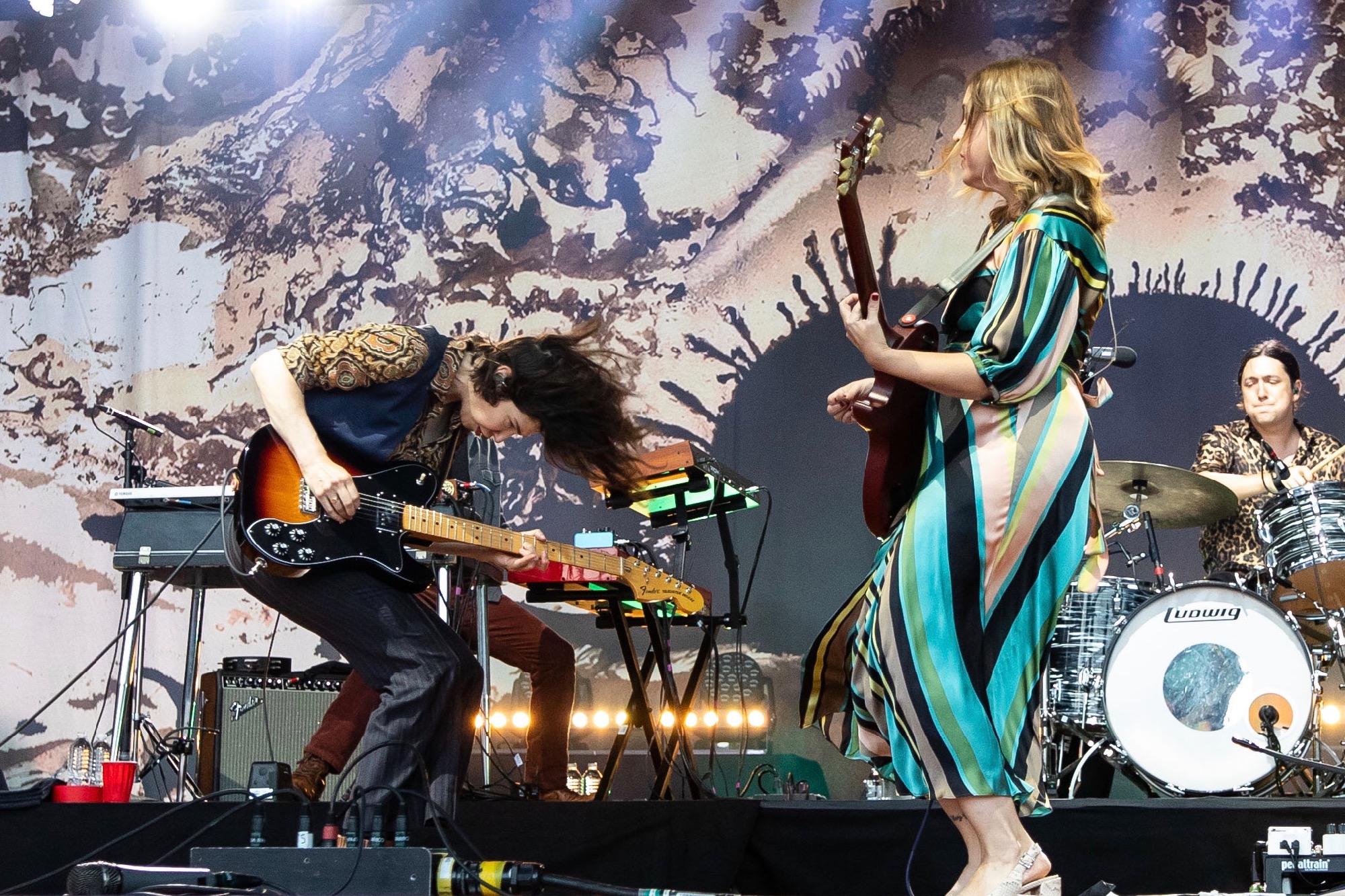 Sleater-Kinney performs at Pritzker Pavilion in Chicago on Aug. 28, 2021.

Armed with songs from their latest album, 2020’s Path to Wellness – the group’s first release without drummer Janet Weiss – Sleater-Kinney found thoughtful ways to express an array of emotions surrounding the evolving events of the pandemic. The isolation of the early-days of lockdown was represented in “Shadow Town” while the title track summoned optimism for the future. Later, Tucker took time out to share her appreciation for the touring crew and band – Fabi Reyna, Vincent Lirocchi, Galen Clark, Bill Athens – before “Complex Female Characters” gave everyone on stage the opportunity to unleash a weird and wild face-melting jam. 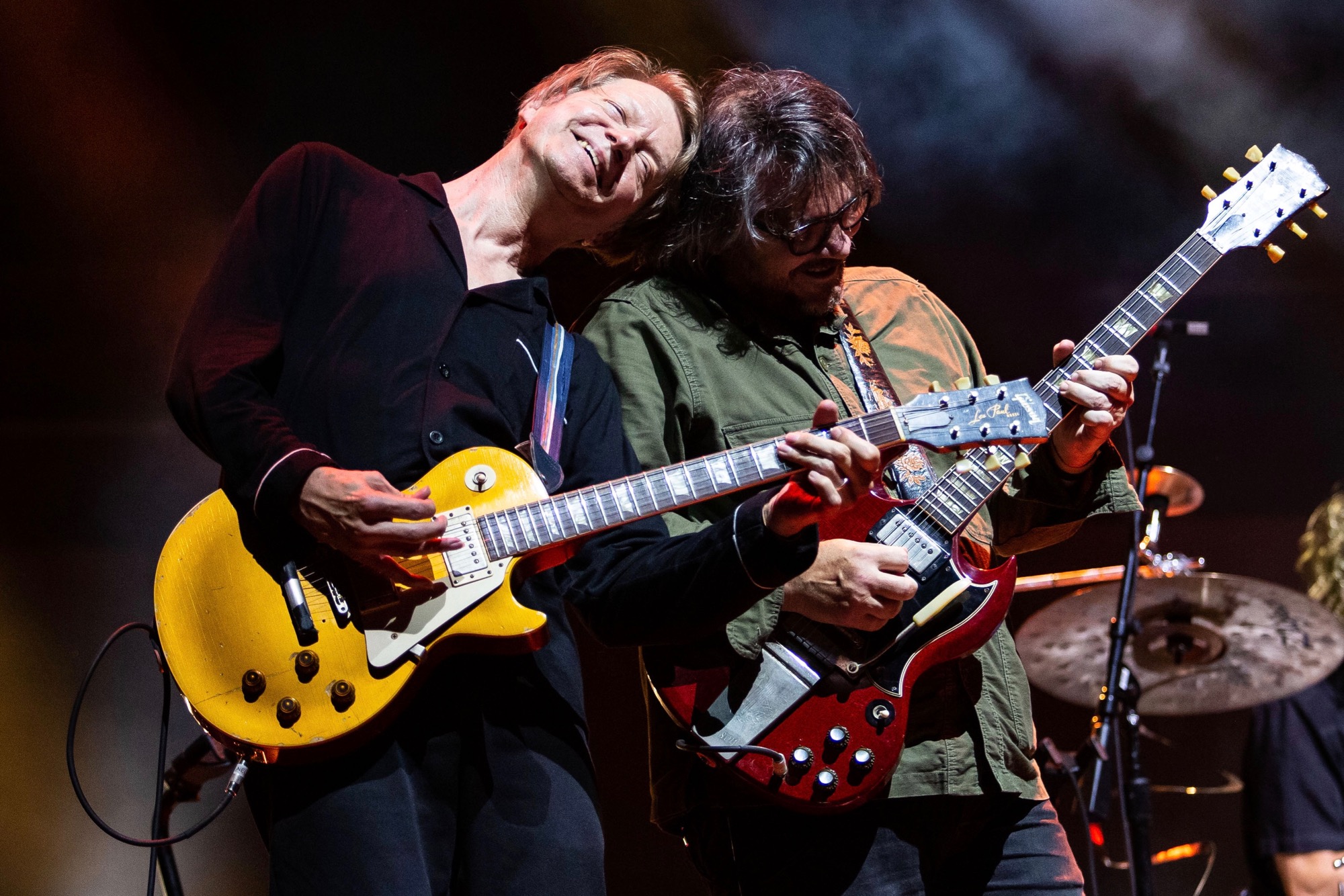 Wilco performs at Pritzker Pavilion in Chicago on Aug. 28, 2021.

When it came time for Wilco’s set, the audience was treated to nothing short of a transcendent experience as Jeff Tweedy and company opened with the timely choice of “A Shot in the Arm” complete with vocal accompaniment from Brownstein and Tucker. At the end of the song, to a sea of cheers, Tweedy exclaimed, “Chicago, finally!”

Wilco seemed determined to give fans a show that was worth the wait after the 2020 It’s Time tour dates were postponed one year due to the pandemic. “Via Chicago,” in all its noisy crashing glory, reached the pinnacle of the evening’s spiritual awakening while the most tender moment came from a newer fan favorite, “Love Is Everywhere (Beware).” Jams were plentiful as drummer Glenn Kotche led the charge on “At Least That’s What You Said” with his ferocious rhythms and guitarist Nels Cline drove the controlled chaos behind an anarchic interlude on “Art of Almost.”

“We missed you. We missed this and we missed that,” Tweedy shared in a touching moment of sincere connection. 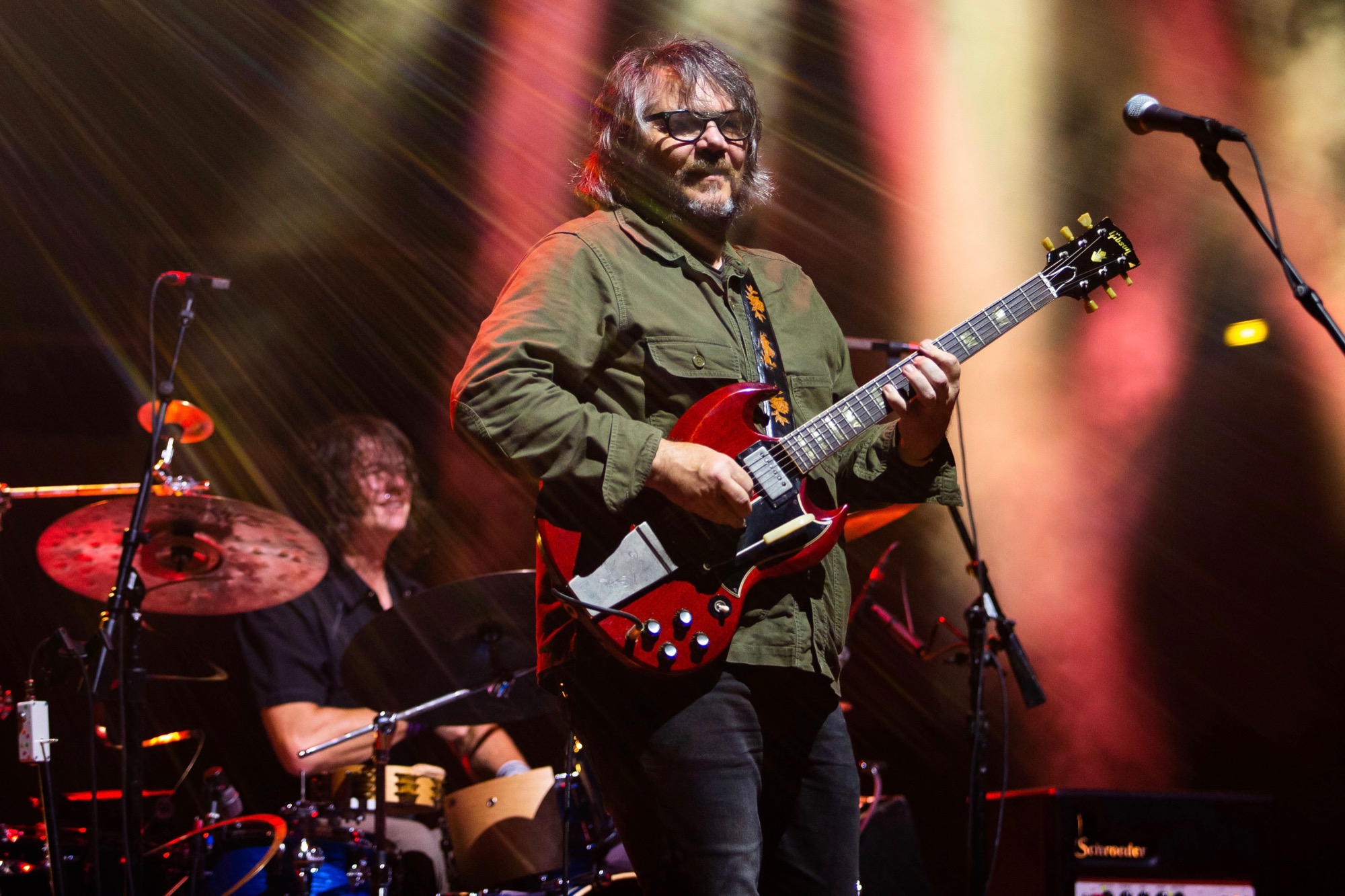 Wilco performs at Pritzker Pavilion in Chicago on Aug. 28, 2021.

With pandemic conditions in flux, no concert-going experience can be taken for granted. Wilco and Sleater-Kinney’s Chicago show required attendees to show proof of vaccination or a negative COVID test and a portion of fans wore masks in the crowd as an added precaution.

For music lovers, concerts aren’t just something fun to do on a Saturday night. Fans have been known to liken the experience to going to church, a spiritual occasion shared in song. Hopefully the above-mentioned safety measures – along with masking initiatives and advocating for vaccinations throughout local communities – will help live music to safely continue in the weeks and months ahead.

Wilco has tour dates scheduled throughout the fall and into next year. Click here to pick-up tickets and more information about Sleater-Kinney can be found at Sleater-kinney.com. 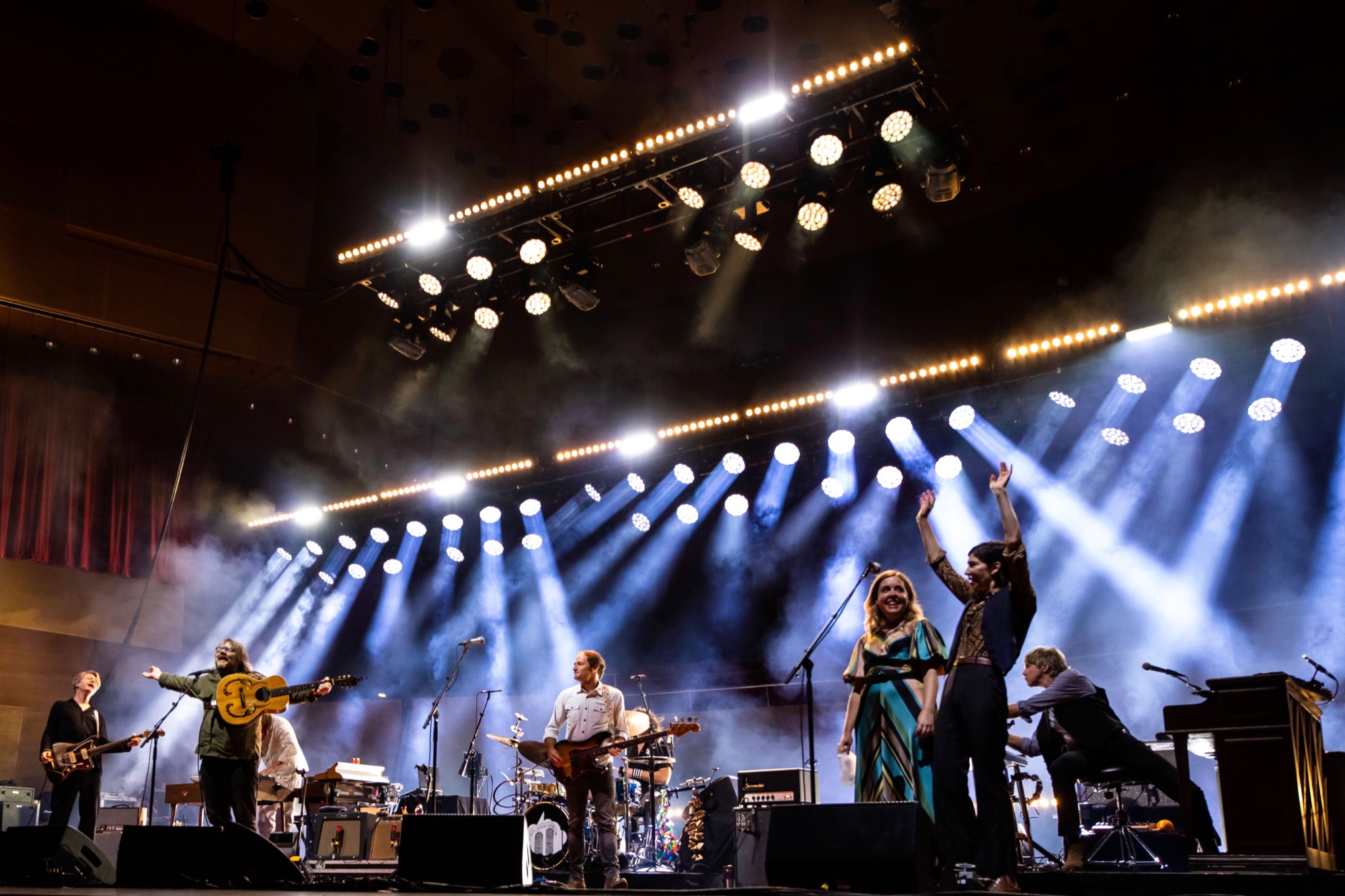 Sleater-Kinney joins Wilco on stage at Pritzker Pavilion in Chicago on Aug. 28, 2021.