Inspired by today’s headlines, Selina Fillinger’s breathtaking new play Something Clean takes a look into the jagged cracks of the aftermath of a sex crime through a new lens – that of a mother on a journey of self discovery as she struggles to make sense of her own grief, intimacy, and culpability. The play was originally commissioned by Sideshow’s Freshness Initiative, and is currently receiving its Chicago debut with Sideshow and Rivendell Theatre Ensemble hot on the heels of its NYC World Premiere at Roundabout Theatre.

In the following conversation, playwright Selina Fillinger and director Lauren Shouse talk with assistant director Kristen Osborn about the process of creating the play for the Chicago audience.

Kristen: Selina, can you tell us a bit about what inspired you to write the play and what your journey has been over the course of its development from the Sideshow Freshness Commission, to Roundabout, to the Rivendell/Sideshow production?

Selina: I was following the Brock Turner case in the news. I read the victim’s statement which – if you haven’t read, you should: it is stunningly brave and clear-eyed and generous. And somewhere in all that I saw a photo of Brock walking to court holding his mother’s hand. After that, I couldn’t stop thinking about her, and the cognitive dissonance it would take for a mother to love a son who hurts women. That was the spark for Something Clean. I wanted to see if I could write about sexual assault and consent without writing another rapist character into the canon or depicting graphic sexual violence on stage; I felt the rapists were getting enough airtime and I was more interested in exploring the hairline fractures leading up to and following an assault.

I spent about a year researching and writing the play for Sideshow’s Freshness Initiative and in June 2017 it had a reading. About a year later it was workshopped in Roundabout’s Underground Reading Series, and shortly after that they told me they wanted to program it in the 2019 Underground season. It’s been a gift having two very different theatres and casts providing workshops and development for the same play, because I’ve had such a range of feedback and so much opportunity to revise.

Lauren and Selina, you both attended Northwestern University and have spent a number of years as Chicago-based artists. Can you talk a bit about the development of your relationship with each other, and to the city and work you make here? How, if at all, has that informed the Something Clean process?

My senior year I was commissioned by Northlight Theatre for my first professional production. Lauren was working at Northlight as the literary manager, so she was my dramaturg and rock throughout the whole process. I truly could not have written the play without her support and feedback. There’s a really strong trust between us, which allows for a shorthand when talking about the work and a lack of ego when giving each other notes.

Chicago will always be the city where it all started for me. Sideshow approached me to write for the Freshness Initiative before my Northlight production was even announced. Which means that I was a Northwestern student with no agent, no productions, just some writing samples they were intrigued by, and they gave me a shot. Similarly, Northlight programmed me in their season based on little more than the first draft that I wrote for an independent study and the recommendation of my teacher. Those are huge risks for theatrical institutions to take, but Chicago invests in young artists and young work in a way that keeps theatre vital.

Lauren: I first met Selina when I was in grad school at Northwestern and I mostly knew her as a talented actor. We never worked directly together, but I saw all her shows and thought she brought such an emotional depth and honesty to the work. I still remember the first time I discovered she was a writer – we were standing by the copy machine in our theatre building and she told me she was working on a play about a young woman who was recruited by ISIS over the internet. She said it was in early stages, but she was excited about it and I asked to read it when she was done. Fast forward six months when I was hired at Northlight as the Literary manager – BJ Jones asked me if I knew this playwright named Selina Fillinger because he was serving as a mentor for a play about a young women recruited by ISIS over the internet. When I finally read the play, I was so enraptured by Selina’s ability to create a page turning emotional experience that captures both truth and humor. She is a real talent and I was thrilled to be a part of her first professional process as the dramaturg on Faceless.

It was during that process where we really developed a shorthand and understood each other’s language. When Selina asked me to step in as director for the Freshness Initiative, it felt so easy because we had already formed this understanding and easy way of working.

S: It was not so much a calculated choice, as it was paying attention to when I needed to come up from air. I take no pleasure in putting my audiences through pain, I don’t see that as the mark of effective writing. And I don’t believe that a purely devastating 80 minutes would be true to life. People going through grief and trauma are not devoid of humor, love, endurance – in fact, those parts of them are often heightened or clarified. That’s the magical thing about humans.

Lauren, as a director, what were your first impressions of the play? Can you talk about any “aha” moments you’ve had in the rehearsal process, or ways that you’ve approached the play that have helped to illuminate the story?

L: When I first read the play almost three years ago, I was completely taken with it. Selina has written a deeply moving play about sexual assault from an angle that I had never encountered before in the theatre. And it is such a light in the darkness – there is so much, humor and honesty and a little dancing that it lifts you up in addition to making you think. The people she has created feel so honest and fully drawn. The play just felt special from the first moment I read it in that it invited us on the emotional journey of healing and the play teaches us to be more empathetic humans.

The real treat in directing this play is that it moves so quickly and the audience gets to go on the roller coaster ride that is Charlotte’s psychological space after this trauma. It is fun to design this kind of space and our brilliant set designer Arnel Sanicanco has created a world to allow the metaphor to really sing. He found a research image of this wall of compartmentalized household items and I was like that is it – Charlotte has compartmentalized her whole life and when this trauma happens, she must learn new ways to cope as she is being pushed and pulled through grief, blame, loss and ultimately hope.

Selina and Lauren – what are you most excited about as the show heads into its Chicago debut? Have there been discoveries you’ve made in the process that have surprised you?

L: I don’t normally cry after a rehearsal run through, especially two weeks out from tech. But I did this past weekend because I was so moved. It surprised me and I hope that our audience will be surprised and moved as well.

Selina and Lauren, what are the conversations that you hope the play will spark outside of the theater? If you could be a fly on the wall listening to every audience member’s car ride home, what would the best audience reaction/revelation be after the show?

S: I think the conversations could be about so many things: culpability, consent, what kind of sexual education program this country needs to implement….I would be thrilled if the play could help people identify for themselves and their partners the kind of intimacy they crave. We rarely have the opportunity to contemplate from a place of calm how we want to be touched, looked at, seen. I hope the play offers that.

L: I don’t know if I could say it any better than Selina so all those things and I suppose I would add how we heal from really dark places in our lives. And yeah, how we can make a more honest and open conversation about sex, sexual education and consent in a world that continues to harbor rape culture. I know I have learned so much about sexual assault prevention and intervention and I hope this play may spark the need for everyone to learn more and to BELIEVE SURVIVORS. 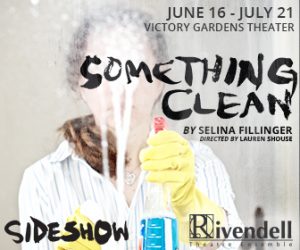 Take advantage of this special offer today – use code REBELLIOUS for $15 tickets!