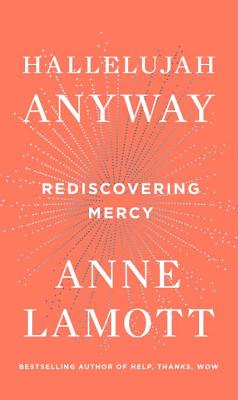 On Monday, April 10, I stood in a long line outside the Peoples Church of Chicago on Lawrence Avenue, clutching a warm Starbucks cup to my chest. It was cold, threatening rain, and I, like so many others around me, had not dressed accordingly. I was among hundreds of people waiting to hear author Anne Lamott read from her latest book, “Hallelujah Anyway: Rediscovering Mercy,” an event sponsored by Women and Children First.

Lamott, who celebrated her 63rd birthday with us that day, has spent the past three decades amassing a devoted following through intimate, humorous and often self-deprecating depictions of life and faith.

I became a part of this following around the turn of the millennium when I read “Bird by Bird” as a young creative writing student, and then “Traveling Mercies,” as a questioning Evangelical. Lamott gave me hope that there was a genuine faith to be had as I became more politically and theologically progressive.

Written in her trademark spiritual without being preachy style, Lamott’s new book is all about the world’s present need for mercy. Here is her broad personal definition of the term:

“Mercy is radical kindness. Mercy means offering or being offered aid in desperate straits. Mercy is not deserved. It involves absolving the unabsolvable, forgiving the unforgivable. Mercy brings us to the miracle of apology, given and accepted, to unashamed humility when we have erred or forgotten … Mercy, grace, forgiveness, and compassion are synonyms, and the approaches we might consider taking when facing a great big mess, especially the great big mess of ourselves—our arrogance, greed, poverty, disease prejudice. It includes everything out there that just makes us sick and makes us want to turn away, the idea of accepting life as it presents itself and doing goodness anyway, the belief that love and caring are marbled even into the worst life has to offer.”


Lamott opened with a Q&A session, and people asked questions such as: How does one start to forgive oneself? And what has she, Lamott, learned from being a mother?

They were fitting questions for an author whose strength comes from looking at big ideas—how to pray, how to be a mother—on a personal level that people can relate to. Her responses fittingly revolved around the idea of mercy. She believes that mercy starts with being friendly to oneself.

Self-love is healing, and it’s a needed part of a conversation about mercy. But sitting in a church in the middle of a city with a growing murder rate, ongoing investigations of its police brutality, and where a man was just violently dragged off a plane … I wanted more.

What I really wanted to know was this: What is the role of mercy in a world where rage is justifiable, when indignation at the world’s injustices might be necessary to encourage change? How can you hold onto a love of life while also protesting its ugliness?

“Hallelujah Anyway” is essentially a self-help book, so it sticks pretty close to the personal. She tackles the touchy subject of suicide with extreme grace and beauty. She does not present the world through in rose-colored glasses.

There are a few political moments. For instance, she mentions the radical acts of forgiveness by the victims’ families at Mother Emanuel Church, the mercy offered by Tibetan nuns in a Chinese prison to the guards who tortured them.

But, I guess I was left wondering: Why choose mercy for a self-help topic?

I wanted another perspective, so I turned to a recent book I find profound, “Radical Dharma: Talking Race, Love, and Liberation.” It was co-written by three Buddhist teachers: Lama Rod Owens, Rev. angel Kyodo williams, and Jasmine Syedullah, Ph.D. The book offers insights into using a dharma ideology as a path to self and societal liberation.

“We don’t have strategies to work with our anger. Within radical activist communities, which I’m a member of, there’s a worship of anger as being vital for community change. Now, I always have to go up against them and push back on that because I see people destroyed in anger and in rage … I think we have to acknowledge anger. We have to honor our anger, but we don’t have to ground ourselves in anger as a momentum to create change.“

And I realized the two books could easily be in conversation with each other. We must address how to both be loving and fight injustice. On a societal level, radical kindness should not be used to let anyone off the hook.

“Why not tap into the model of the Buddha, Jesus, or Wavy Gravy, the knowledge that if you do loving things, you’ll have loving feelings?” Lamott asks her readers how one could not love mercy, then immediately answers her own question: “Here’s how: We’re so often rattled by lingering effects of trauma and paralyzing fear.”

Why is merciful self-love so important? Because without it, we can’t heal enough to fully extend mercy toward others.

“I know that sometimes we distrust healing because it means that we have to imagine a different way of being in the world beyond our anger, woundedness, or despair. Moreover, we believe that to move beyond these hurts means that we can no longer be attuned to the suffering of communities and people struggling for justice, equality, or basic visibility. Or maybe because we feel that healing means forgetting that we have been hurt, oppressed, and that there is an oppressor who should and must be held accountable for their violence … We have learned that anger is a part of the work of social liberation, that being angry is what motivates and drives us. To a certain extent this is true. However, I believe that the true blessing of anger is how it can indicate an imbalance in our experience and in the world around us. But we have to be very clear: Anger is not about creating or building up. That is the work of loving.”

I wonder if Trump or Bannon or any of the other alt-right leaders would be the people they are if they’d grown up learning how to truly love themselves. Or if their parents had known how. Perhaps the role of personal mercy is, as Lamott put it, to heal from personal trauma and paralyzing fear to become whole enough people to truly be able to love others. “An open, merciful heart is a setup for pain, shame, and being mocked. So being merciful takes guts. It takes accepting pain and continuing to love. It takes admitting when you’re wrong and asking forgiveness.”

My recommendation, then, to find out the role of mercy in the U.S. today, is to read “Hallelujah Anyway” and “Radical Dharma” side-by-side. Because in the end, we need both: personal healing and societal.