Working at a bookstore is a wondrous experience, if only for the unfiltered access to books. Back in 2011 I wasn’t reading many comics, and was even less interested in Marvel superheroes. But while thumbing through a shelf of graphic novels I came across a Book Market edition of Astonishing X-Men: Storm that caught my eye for two reasons:

Come to find out, the Dickey collection is a reverse retelling of the first time the two meet in Uncanny X-Men #14 and #15 where T’Challa first saves Storm from the hunter Andreas De Ruyter before the two fall in love.

I knew the book would be tender with high levels of mess and seduction given the author, and Eric did not disappoint. His writing paired with illustrations that highlight the sweet care and love between these young superheroes make this edition a beautiful offering to the most powerful union in all the universe.

Astonishing X-Men: Storm introduces the weather goddess in small-town Africa running with a band of orphans that are led by a man named Teacher. Being that she’s from New York and clearly different from the others, we get to see the sometimes contentious relationship between Africans and African-Americans as she attempts to control the “windrider” powers as a young girl. 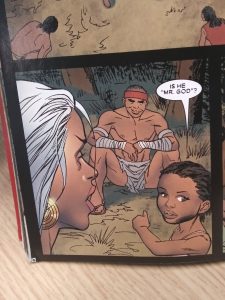 Yes, ma’am I believe he is.

T’Challa is very much not the center of this story, as he shouldn’t be. Yes, he’s the young prince of a powerful and technologically advanced nation of black people, but he’s also a young boy traveling with just the clothes on his back and a mat to sleep on. He spends just as much time in awe of her powers as we do devouring the electric pages that illustrate them.

True Marvel heads have been calling for a Black Panther/Storm love story on the big screen ever since Marvel started rolling out these three- and four-hour movie epics. It’s also why we’ve been so hard on light-skinned actresses who’ve been tapped to portray Ororo. The nuance of Ororo being an outcast with dark skin and white hair is lost when Alexandra Shipp plays her, no shade.

In Dickey’s Storm, we see T’Challa and Ororo at their flirtiest banter and reconciling their vastly different upbringings. Who else but a weather goddess could tame a panther god? Chadwick and Lupita have expressed that they hope their Black Panther pair stays together (Nakia’s storyline drops off dramatically in the comic world) but if we get an opportunity to see this graphic novel come to life, then sorry loves, you’re moved to the back of the line.

I read this collection in a beautiful hardback edition, but nowadays it’s out of print. You can still hunt down your own copy on Amazon or Amazon-affiliate AbeBooks for a hefty penny, or watch the issues on Digital Comics.

I had to track a copy down for my personal archives to write this article, but like all of my graphic novel faves, it was so worth it.