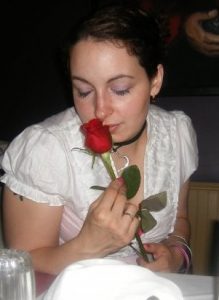 This is a photograph of me on Mother’s Day in 2007. I was at a restaurant dining with my then-fiancé’s family. The waiter came around to pass out roses to mothers. I told him I wasn’t a mother, but he gave me one anyway.

That rose, held to my nose, the petals so delicate. The scent so inviting. The center a womb from which beauty unfurls.

If you want to understand whether or not I’m a mother, that rose —now lost somewhere, tucked away in some yet-unread book, is your answer.

It was potential in my hands. And it withered. And dried. And was somehow lost.

My mother told me that she knew she was pregnant with me when she felt a “ping.” When I was 23, I went out to grab Chinese food and a movie. As I walked into Blockbuster, my whole body froze. I felt the “ping,” what used to be called the “quickening” back when abortions were illegal and women bled to death trying to scrape their own uteruses with coat hangers. Taking questionable potions. The quickening was the time at which many doctors would not perform abortions.

I had an abortion after that ping. That quickening. And it wasn’t my first abortion. It was my third. It was my last one.

This is not a political piece, though my political beliefs about this are so passionate that they may bubble up. It’s a personal piece. About how these choices made me feel. How they still make me feel. I will say this: Yes, I have pangs of regret and loss and sadness, but I am very glad I had that choice.

Mother’s Day is particularly difficult for me. It irks me when people say “Happy Mother’s Day” to every woman they see. I mean, yes, every woman bears the limitless warmth, weight and strength of motherhood, but some women are not mothers, whether they’ve chosen not to be or whether they can’t be.

Abortion is so stigmatized that women rarely talk about it to other women in a voice above a whisper. I’ve had fierce, can’t-be-fucked with women come to me, not knowing I have had three abortions, and tell me in an urgent whisper that they had an abortion.

It’s an unspoken-of pain. It lies behind eyes that hold back tears when they see a baby or pass the toddler aisle in a department store.

There’s a disconnect because there’s a stigma of shame, but the sadness, the regret, the emptiness do not automatically mean that a woman wishes she’d chosen otherwise. We still stand by that choice, though we recognize the complex and painful implications of it.

Would They Have Liked Poetry?

“Why didn’t you just give them up for adoption?”

That is the one question that makes me feel guilty about my abortions. I feel bad talking about them to women who are unable to have children. I feel like someone who found a buried treasure and poured all the coins and gems out into the sea to be swept away.

Keep in mind that adoption is not always a safe choice for the child in a foster home or an adoption agency.

But we can talk about it and we should talk about it. Because it happened to us.  Let me rephrase that: because we did it and lived it and relived it at friends’ baby showers and at their kids’ birthday parties.

I do not feel direct guilt or regret for having abortions. Do I wish I’d lived my life more responsibly? Yes, in many ways.

Am I selfish? No. Have I preserved myself? Slowly. Is this a part of myself I accept and celebrate and shout about in all its complex, entangled, hormone-fueled, biological clock-clanging loss-feeling glory? YOU’RE DAMN RIGHT I DO.