After being diagnosed with cancer, Kathy Flores found herself in a less than unique situation at a Catholic hospital in Wisconsin in 2008.

She needed a needle biopsy on her neck. As a domestic abuse survivor, Flores has a lot of trauma that involves her throat, so she asked her doctor if her partner, Zephyr Kendzierski, could be by her side during the procedure. The doctor agreed right away. 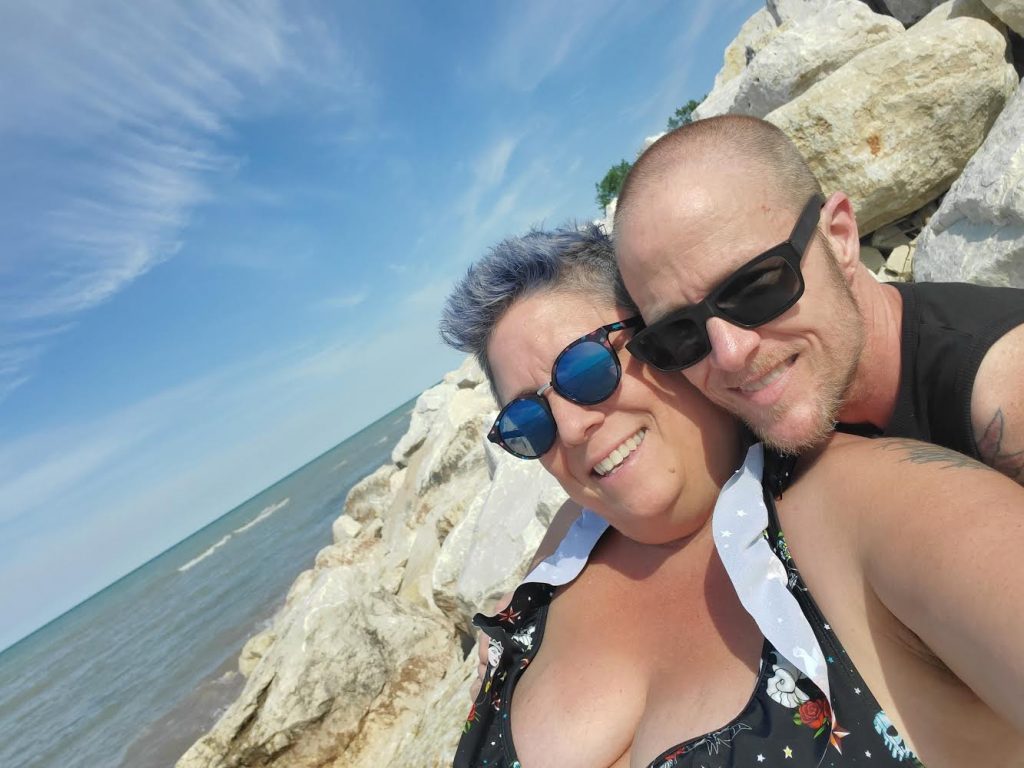 On the day of the procedure, Flores went to get changed into a gown. When she returned, she asked the nurse to get Kendzierski. The nurse refused.

“Your friend is probably way more comfortable sitting out in the waiting room; we don’t want to bring them in here,” the nurse said.

Flores told the nurse Kendzierski was her partner, not her friend, yet the nurse refused to acknowledge their relationship.

Flores is the Anti-Violence Program Director of Diverse and Resilient in Appleton, WI. Her career is based on being an advocate, and at that moment, she couldn’t just be a cancer patient — the nurse wouldn’t allow it. She had to be an advocate for herself, as well.

“In that moment it became very clear that one person’s religious views and bias can get in the way,” she said. “It was all dependent on who was seeing me, rather than my rights as a patient.”

Besides cancer, Flores has also dealt with a brain aneurysm and has multiple sclerosis. Her ongoing health concerns and the couple’s experience with the biopsy turned the couple into strong advocates for marriage equality. In case of an untimely death, Flores wanted Kendzierski to have the same end-of-life rights available to heterosexual spouses.

On July 18, 2014, Flores and Kendzierski were welcomed at City Hall in Chicago with banners for marriage equality. “We felt so welcomed and so affirmed as a couple, we were thrilled,” Flores said.

Then, five years into their marriage, the couple ran into new legal hurdles when Kendzierski decided to transition. They are gender-nonconforming with a masculine presence and use they/them and he/him pronouns. But most legal documents don’t allow for a nonbinary gender.

“Society does not really understand gender nonbinary so they knew for their safety if they had to pick a gender, they would pick male because of everything else that was happening. They didn’t trust that a police officer wouldn’t discriminate if they saw a nonbinary gender marker,” Flores said about Kendzierski.

Kendzierski changed their name and gender through the court system, and they were able to make the changes on several state and federal identity documents. Everything went smoothly for Kendzierski until they called the Cook County Clerk’s Office to ask about amending their marriage certificate to reflect their new legal name. The Clerk’s Office told them amendments to marriage certificates were not permitted.

They then called the Transgender Law Center and learned that, at the time, no state in the country allowed amendments to marriage certificates. Kendzierski and Flores were immediately concerned about health issues that may arise and how either one of them would deal with after-life care.

Flores found out that Elizabeth Ricks, staff attorney for the TransLife Care Program at Chicago House and Social Service Agency, and Mike Ziri, the director of public policy at Equality Illinois were working on a bill known as HB2590 that would allow name changes on marriage certificates.

Ricks asked Flores to testify for committee hearings of the bill, and she wrote testimony that was read in Springfield. 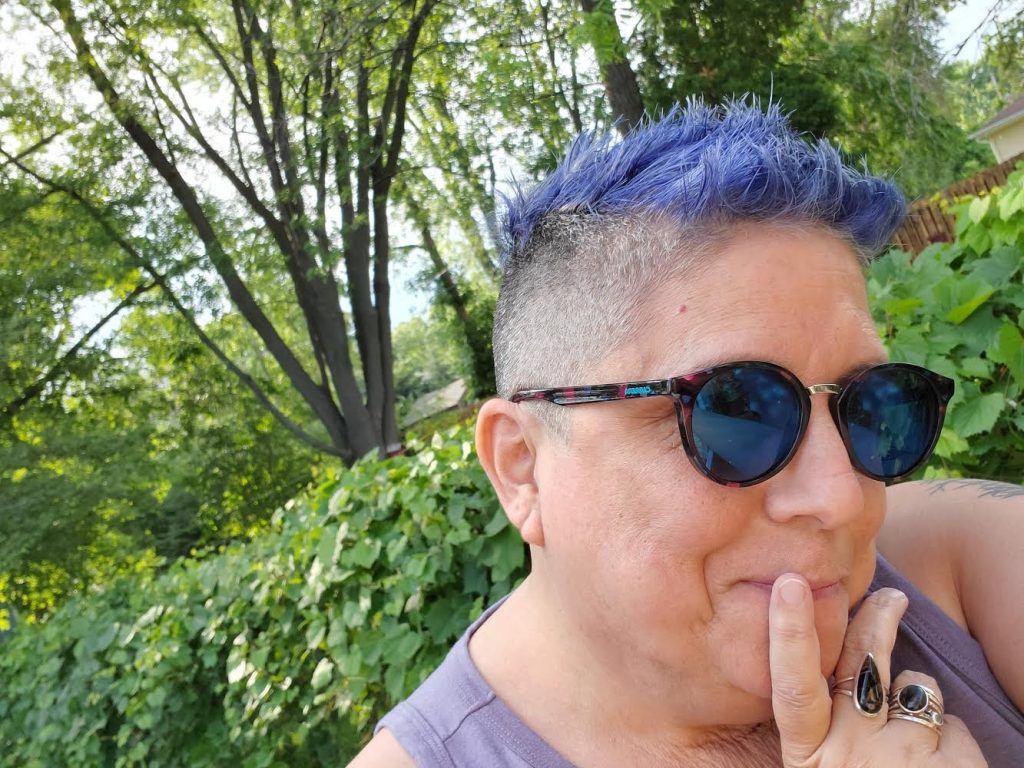 Flores talked about her health issues, the discrimination Kendzierski has faced, and both topics’ impact on their marriage. With House Bill 2590, Kendzierski would have their correct name reflected. Flores began advocating in Illinois and found a tight-knit community that supported her and Kendzierski.

The bill was drafted by House Representative Ann Williams (D – 11th District) and sponsored by Sen. Sara Feigenholtz (D – 6th District). On June 25 of this year, the bill had passed through both Houses and was sent to Gov. Pritzker for approval.

Ricks explained that once the new law is in place, residents will be able to go to the county clerk’s office they were married in, explain their legal name change and show their judge’s order, and more easily request a new marriage certificate.

“It is so much easier to have matching documents, but it is particularly important to trans and gender non-conforming people because they outed every single time they show the one document that does not match,” Ricks said.

“Some people say, ‘It’s a marriage certificate, it’s such a small thing,’ but it is really really impactful for trans people to have documents that reflect their families and show who they are,” Ziri added.

For some folks, like Kato Lindholm, this change is just as important.

Lindholm is a professional dancer and instructor who competes in dance competitions with his husband. He is a transgender man, but since he transitioned after his marriage, the gendered language on his certificate are incorrect.

After he and his partner got married, the question of insurance came up. Health insurance in the United States is already unreasonably difficult to obtain due to access and price, but when Lindholm applied for health insurance through his husband’s job, he discovered a second obstacle to obtaining insurance – the gendered language on his marriage certificate.

Even after checking their plan and if the company would accept their documentation, they still got a call from human resources.  HR told Lindholm his marriage certificate did not match other documents, and a process that should have taken an hour took six weeks.

Lindholm and his husband tried to change his title on the marriage certificate to no avail. “I was completely baffled that it couldn’t be changed; I didn’t think it could be true,” Lindholm said.

Lindholm connected with Ricks who had represented him before, and together they approached the Cook County Clerk’s office. “Through several discussions with them, they came to the conclusion that they needed statutory authority to make that kind of amendment, so we encouraged that direction,” Ricks said.

The Clerk’s office decided to file the bill, and Ricks reviewed the bill’s language and encouraged them to include Lindholm in their committee hearings. “This is about his life and him having the courage to stand up and say this is what my family needs, and I’m not giving up until we get it,” Ricks explained.

Senate Bill 139 deals with the gendered language on marriage certificates, such as switching husband to wife or wife to spouse. It allows transgender residents of Illinois to either change their title or dissolve the gendered titles altogether on their certificate.

The bill was drafted right before COVID-19, so they had to hit pause for a while. Once they were safely able to do so, the Clerk’s office worked with Sen. Feigenholtz to introduce the bill. Lindholm was included in the committee hearings and process.

“Suddenly you are forced to out yourself to strangers and you really shouldn’t have to,” Lindholm said, describing the process. “It is another thing you have to prepare yourself for, and it shouldn’t be that way.”

While the bills were being lobbied in Springfield, transgender and nonbinary people all around Illinois like Lindholm and Flores were putting their vulnerability on the line for respect and visibility from the Illinois government. Their efforts paid off and both bills will be made law this year.

The Senate Bill 139 was sent to Gov Pritzker for his approval on June 17. Soon Lindholm will be able to return to the clerk’s office and request a change in the term used on his certificate.

“It feels a little bit like a sense of justice,” Lindholm said. “I can live a life like everyone else.”

Help us publish more stories like this! Please consider supporting us on Patreon.

Sam Stroozas is the sexual health and reproductive justice fellow for Rebellious Magazine and a freelance journalist based in Chicago covering gender and social justice issues. Follow her on Twitter @samstroozas.