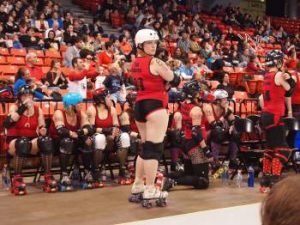 It’s no secret that women are not so great about supporting women’s sports. I include myself in that category. I’ve never seen a WNBA game. Though to be fair, I haven’t been invested in the NBA since Michael Jordan stopped playing for the Bulls, which was more years ago than we really need to get into right now.

There are any number of reasons why women don’t follow women’s sports. They can range from the simple inability to access the games (check out the Chicago Sky website to see how rarely you can catch them on TV), to the way women are socialized from a young age to think that sports are for boys, to the concept that we expect women to be able to perform the same athletic feats as men and are disappointed when they can’t.

There are things we can do to rectify this problem. Giving young girls better messages about sports is a start. I think we’re already seeing that, at least from parents. Sports magazines can start featuring more women on their covers any day now, ahem. But what about all of us ladies who are already adults? It’s hard to talk yourself into liking sports you’ve never been interested in before, but lucky for you, I have the solution: You should become a roller derby fan.

Why? Good thing you asked, because I have lots of reasons for you.

1.     You won’t go in expecting slam dunks when there won’t be any. In other words, men have not ruined this sport for you. Only women play it, so that’s the only style of play you’re going to see. You’ll come to it with an open mind.

2.     It’s violent! I say that with an exclamation point, because sports are exciting partly because of all the action. The players slam into each other, but don’t go expecting a hockey brawl in every bout. That said, there are plenty of injuries. If you spend much time around the arena during a match, you’re likely to see a few walking (or limping) wounded. “Even though I’m wearing tights and fishnets, it still burns,” Zombea Arthur told me, of the effects of skidding across the floor after a hit. Hermione Danger told me she’d needed surgery on one knee, was currently recovering from an ACL injury on the other knee, and had had a concussion. And those were just her “major injuries.”

3.     The players skate under names of their choosing. Hence, Zombea Arthur and Hermione Danger. Also, Athena DeCrime and Mobile Chernobyl. Way more fun than boring normal names! And, as mentioned above, they wear fishnet stockings out there. Style points all around.

4.     You might be witnessing history happening. Though roller derby has been around for a while, the current iteration of the sport has only been around since the early 2000s. Strategies are still being developed. Teams are still being started. The league motto is “for the players, by the players,” because it’s essentially a non-profit. Everyone is a volunteer. That means nobody is being paid millions of dollars to be out there. Also, there are no long lists of arrests for players (yet), so you don’t have to worry about them not being good role models for the kids.

5.     Did I mention role models for the kids? Here they are. If you go to a roller derby match, you’ll see groups of little girls asking the players for autographs. If it doesn’t warm your heart a little bit to see girls asking female athletes for autographs, you may be a lost cause.

6.     Oh yeah, it’s also a fun sport to watch. A recent bout I saw featured a huge lead in the first half, but then was decided in the final seconds of the second half, in favor of the team that had been down by so much in the first half. There’s speed, agility, the aforementioned violence, and at the bout I saw, a cupcake-eating contest and a pretty spectacular dance performance during halftime.

Still on the fence? Maybe you’ve never really liked sports or you think the game sounds confusing. Not to worry. The announcers are used to newcomers and they’ll explain what’s going on, from the basics of how to score to the nuances of the various penalties. And if you’ve never liked sports, that doesn’t mean you won’t like this one. There won’t be anyone making you feel bad for not understanding what’s going on. Don’t give up after one bout. Go to a few. Have a few beers. Pick a team to root for. There are four different local teams to pick between, plus an all-star travel team. The Chicago travel team is ranked #6 nationally, in case you were wondering.

The part that really got to me was how much the players love the game. If you want to hear it from the horse’s mouth about how great this sport is, talk to a player. Hermione Danger, she of the ACL injury, told me the worst thing about roller derby was missing bouts when you’re injured. Zombea Arthur told me she’d never liked sports before, but was now rearranging things in her life just so she could fit in all the roller derby practices.

But that’s not all! There are Windy City Rollers bouts coming up this summer, down at UIC Pavilion. Take your mom or your daughter, or maybe a few female friends. Or male friends. There’s no reason they shouldn’t be roller derby fans as well. See for yourself why this is the most rebellious sport.