Twelve years ago, Shirlondra Brooks decided she would never again have another child. Depending on your own experiences in the workplace, you may or may not be surprised by what spurred her decision.

“When I became pregnant in 2005, I marched straight to HR to help sort through my options in terms of short-term disability for pregnancy and maternity leave,” says Brooks. “HR informed me that every employee is given up to 12 weeks of ‘maternity leave’ with no pay.”

The United States remains the only industrialized nation without paid family leave. With only 13 percent of private employers offering paid leave as a benefit, the option left for most American workers who need time off to care for themselves or their loved ones is the Family and Medical Leave Act (FMLA). Passed in 1993 in part through the advocacy of groups like Women Employed, FMLA allows eligible employees to take up to 12 weeks of unpaid, job-protected leave in the event of a new child, or to care for themselves or a family member with a serious medical condition.

FMLA has undoubtedly benefited millions and helped make workplaces more family friendly. But 40 percent of the workforce isn’t eligible to take leave through the FMLA, and millions of American workers who are eligible can’t afford to take unpaid leave. Every day across the country, working people have to weigh taking needed time off against losing a paycheck, their health insurance, or even their job.

Shirlondra is all too familiar with that dilemma, as the only paid time off she had to welcome and bond with her new child was 10 days of vacation and sick time. She’d already exhausted most of those on prenatal visits to the doctor, she says. “So I went on maternity leave with no benefits, which forced me to return to work earlier than the expected 12 weeks.”

While the lack of pay was a major factor in Shirlondra’s early return to work after giving birth, fear of losing her job was another. “During my time off, I was plagued with phone calls and even had two home visits from the leadership and administrative staff.”

Twelve years after that experience – and 25 years after the passage of FMLA – America continues to lag behind the rest of the developed world when it comes to its family leave policies. Zero Weeks, a film exploring the impact on working families and the cost of doing nothing, premieres in Chicago this week. It continues a national conversation that has grown more urgent, with New York recently joining the list of states enacting policies to address this American crisis. 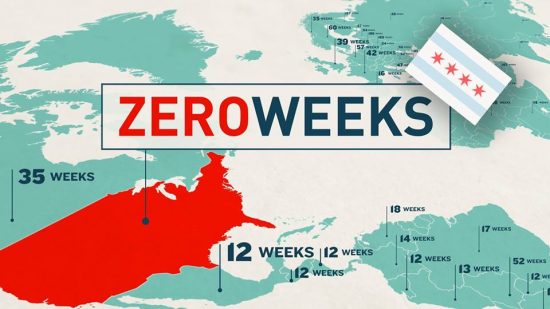 With the proposed Illinois Family Insurance Act, we could be the next to lead the way. The bill would provide partially-paid leave for all workers in Illinois, while also recognizing the diversity of America’s families with a more expansive definition of who qualifies as a family member. The importance of that recognition isn’t lost on working women like Jessie Gotsdiner, whose parents had to navigate the outdated family definitions that inform many leave policies when they adopted their daughter from South Korea in 1990.

Her father, an attorney, had the flexibility of reducing his hours at work so he could spend time with their new child. Her mother, who was also an attorney, could only use a week of vacation to be with her newly arrived daughter because adoptive mothers did not qualify for maternity leave.

“Frankly, it’s a little insulting,” says Jessie today. “I was given up for adoption simply because I was a girl. Shouldn’t my parents’ selfless act have warranted parental leave like any other couple with a new baby?”

Whatever the individual circumstances, nearly everyone will need to take time away from work at some point in their lives to deal with a serious personal or family illness, or to care for a new child. It’s past time that our leaders realize zero weeks for managing these life events could never be enough.

Watch the trailer below:

Ishena Robinson is a writer, advocate, and trained journalist. She holds the position of Marketing Communications Associate at Women Employed, a non-profit that has advocated for the economic security of working women since 1973.