My first exposure to the love and light that is Taryn Brumfitt happened several years ago when scrolling through my Facebook feed. Not wanting to face a looming deadline, I clicked onto the site, and there in front of me were two split-screen photos of Brumfitt—the “before,” a tanned, thin woman in a bodybuilding competition. The “after” showed her naked and sitting sideways, smiling after recently giving birth to her third child.

I remember feeling at once complete disbelief, awe and admiration. For the first time in my life, I was looking at a woman confidently living in her body. I wasn’t the only one impacted by the photo—it was shared 100 million times, and Brumfitt ended up doing press around the world on the concept that women could actually love their bodies “after.”

With some social media stalking, I learned that Brumfitt wasn’t a famous person trying to make a statement; she was a photographer, wife, mom and friend—a regular individual—from Australia who had struck a chord with millions of women and wanted to make a difference. 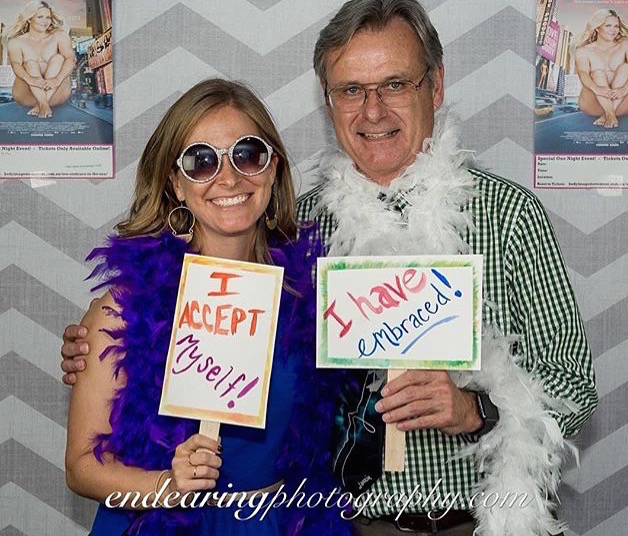 I was entranced, especially when I found out about the launch of the Body Image Movement and her mission to create a documentary around body positivity. The movie, “Embrace,” came out to rave reviews at the Sydney Film Festival in mid-2016. It was released in the U.S. in September.

There were screenings near my home in San Francisco, and I went with my husband a few days after it opened. We were both brought to tears, deeply touched by the care that she put into the film. Wanting to bring it to my family in Michigan, I hosted a screening in Walled Lake, a town of just 7,000 residents. Nearly 100 people attended; and after the film I hosted a panel discussion with a psychologist, yoga instructor, fashion designer and representative from Project Heal, a non-profit that helps pay for eating disorder treatment. The event was a huge success and even included a pro-bono photographer taking images on a makeshift red carpet. The event was a life highlight for me.

Brumfitt’s personal journey to loving her body has been a difficult one. She long hated her body. When she finally got to the size she’d always wanted and was talking with colleagues in bodybuilding competitions, she learned that none of them were happy as a result of their bodies. And neither was she. Even so, she was fixated on the concept of a perfect body, so she scheduled a number of plastic surgeries and planned to go under the knife to permanently “fix” her figure.

That’s when, one day, she looked at her young daughter and experienced what she calls a “lighting strike.” She fell on the floor in a heap of tears, knowing that the plastic surgeries would provide a negative example for her daughter. Brumfitt cancelled them all, took the “after” picture of her naked body and posted it to Facebook. Emails poured in from women all over the world on how they were dealing with feelings of body loathing. Brumfitt knew she had to do something, so she traveled for the next two years interviewing women from all backgrounds on body issues.

I caught up with her recently over the phone from Australia. 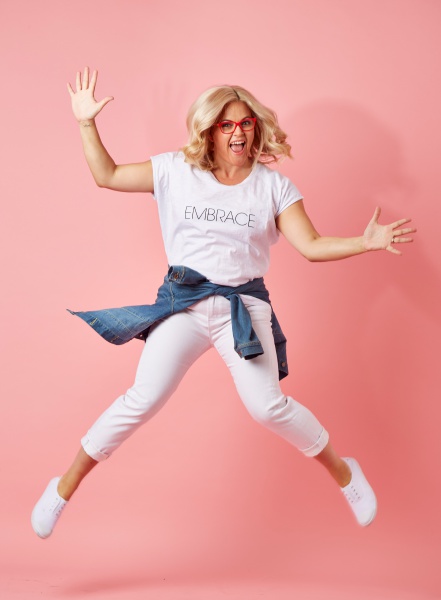 How has “Embrace” transformed your life personally?

I feel like I’m doing what I’m meant to be doing. I love the creative side of it, sharing the mission of the Body Image Movement and helping people. “Embrace” is a great vehicle to start a conversation—a fresh dialogue about how we feel about our bodies. My life has been turned upside down in the most positive way. I feel honored to be the person to lead this movement of positive change.

When will “Embrace” come out to the masses in the U.S.?

It will come out on iTunes on Feb. 14th in the U.S.! It will also be available on Google Play, Amazon, Comcast and a ton of other channels.

What excites you the most about this?

I toured around the U.S. going to screenings last year, and I think the one that touched me the most was in Phoenix, where I was able to watch it with Renee Airya and Jade Beall, two women in the film. It was amazing from a personal perspective to sit with them in a sold-out cinema of more than 360 people.

I’m hoping to go on “Ellen” this year. We’ve been communicating with her producers, and the minute we get the call, I’ll be on a plane. (Note: Check out Brumfitt’s daily dances on Instagram, as she prepares for “Ellen”—they are a hoot.)

What is next for you?

I’ll be working on “Embrace” for the next 18 months—we are releasing it in Canada, the UK and in Europe. From there, I’m looking to write another few books, and there are discussions of a possible TV series in the U.S.

Eventually, I’d like to do a second documentary. We’ve also contracted with education specialists for an education rollout in schools. We’ve put together a study guide for teachers to use in the classrooms. Australia will start using it this year, and we are working on when to roll it out in the U.S.

What is your biggest piece of advice to help women love their bodies?

Take a moment to reflect on your final few days. What thoughts will be going through your head? I’ve asked this question to thousands of women around the world, and none of them tell me they will be thinking about their big bumps or cellulite.

Try to have gratitude for what you have. My body is not an ornament; it is a vehicle for my dreams. If we can all tap into the perspective of what is important in our lives, we can have access to a rich, abundant life!

(Photo credits: Top & bottom right, courtesy of Taryn Brumfitt; top right, of the author & her father at the Michigan screening of “Embrace,” courtesy of Endearing Photography)

Katie Morell is a thirty-something journalist based in San Francisco. You can read more of her work at www.katiemorell.com