“I think stand-up is a fun way to talk about real stuff and explore difficult human experiences in a way that is therapeutic. It’s fun to explore dark things and have everybody unite on the weirdest f*cking thing in the world,” said Chicago-based comedian Carly Ballerini of her knack for examining serious topics through a silly lens.

From sharing weird family stories to raising awareness for medical conditions, Ballerini cuts to the funny of any topic, offering catharsis to fans of her hilarious stand-up and sketch comedy creations.

“I find that when a bunch of people from different backgrounds and different lives come together and laugh about one thing, it’s a unifying experience that I think is powerful and cool,” she added.

September was Alopecia Awareness Month, and Ballerini seized the opportunity to develop powerful and cool material about the condition that is synonymous with hair loss.

“I have alopecia, so I’ve been doing a lot of comedy without my hair on the whole month to kind of raise awareness. I’m developing that material now, and you have to do it bald, so it’s very weird because you have to be like, “Hello. Whatever,’” Ballerini said with a laugh, noting that she also has an alopecia-inspired web-series in the works.

Ballerini doesn’t just want to offer a chance to bond over gut-busting laughs, she is also interested in finding solutions to universal problems. With her soon-to-be-launched podcast, “Don’t Try This at Home,” the comedian aims to provide advice on healthcare by mining the lives of herself and her friends for hilarity. The goal is to start the first episode by sharing the craziest things people have done to avoid going to the doctor and end it with expert advice about where to go for free healthcare.

“The podcast came to me when I was talking to a couple of my friends about different stuff we were doing to not go to the doctor,” said Ballerini, noting her involvement with the stand-up show Ladylike as another inspiration. “I want the podcast to be inclusive, not just well-off twenty-somethings who’ve just gotten off of their parents’ insurance for one year. I want to include people who have never had insurance or have always had a weird relationship with healthcare. We’ll see where it goes. It’s a fun way to talk about something real that’s happening to a lot of people I know.”

As a touring comedian, Ballerini has experienced firsthand what’s really happening in communities from state to state and coast to coast. She’s found that, regardless of geography, people are more alike than they are different.

“It’s great because you get to see different perspectives and you also get to figure out how to make your weird thing the most universal. I don’t change my material for audiences, but I do change my approach so it’s fun to figure out the approach to try to get to the thing that you want to say somewhere like in the south,” said Ballerini. “You have to have a different approach so it’s interesting and you find out that people are just people and everybody is pretty much the same.”

When she isn’t touring, Ballerini performs across Chicago – at shows including The KiKi, Wet Cash and more – and she produces “sporadic” episodes of her sketch project “The Gimme Show,” with Ali Drapos and Case Blackwell, which explores such topics as grammar tips and “Solid Advice.”

Ballerini added, “Comedy can be great if it’s just silly – I love silly comedy – but also there’s lots of stuff to talk about, you know.” 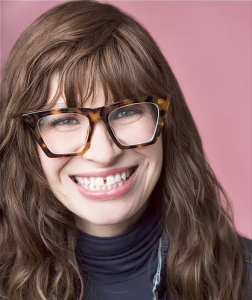 One of my favorite comedians is Nate Bargatze. He’s really funny and tells this story about going to see an alligator or something. It’s just a story, but I can listen to it over and over again and it’s hilarious every time.

A joke that I like to do right now is the stupidest joke. It’s not about anything important. It’s about these pigeons who have sex outside my window and I love telling it. It’s my story right now, but it really has nothing to do with anything (Laughs).

I love eating at The Publican. I think it’s great because you can share a lot of stuff. It’s kind of expensive, but not if you’re sharing with everybody. Then you can get the whole Fulton Market experience and walk around there. I also like the Chicago Athletic Association. If you have work to do, go there. It’s this lovely environment and you can get a cocktail and sit in a leather chair and just type.

For a comedy show, you should go to CYSK [Comedians You Should Know]. That’s a good one. I’m trying to think about what else I do. I walk my dog (Laughs). I like to walk around the lake.

Go to the Planetarium. I have no good secrets.

There’s so many, I just don’t know what to include because I’ll forget all the stuff I’m supposed to say (Laughs)…

A special that I think is amazing and got almost no play was the new Wanda Sykes special. It was wonderful and nobody was talking about it. Go watch that right now. She’s so good. She’s a master. I feel like she’s very popular, but I think she’s not even popular enough.

I feel the same way about Maria Bamford and all of the amazing people. Oh and Fortune Feimster is so funny and I feel like not a ton of people know about her.

When I get mad. When someone tells me I can’t do something I get really rebellious. When I get rebellious I will either stop at nothing to do the thing that someone told me I couldn’t do or I’ll get sad and not do anything (Laughs). In general, I get really motivated.