Throughout time, the patriarchy has associated being ladylike with such words as genteel, polite, refined and even elegant. Comedian Gena Gephart is redefining the term to mean whatever the hell she – and a lineup including some of the best Chicago-area, female-identifying and non-binary storytellers – want it to mean with her monthly showcase Ladylike, which is held the third Monday of the month at 8 p.m. at Cafe Mustache.

With Ladylike, Gephart and her co-producers – Carly Ballerini, Sarah Sherman and Allison Dunne – dig into the often unshared yet all too relatable aspects of life by inviting six storytellers to perform humorous tales about anything from the perils of taking laxatives to coping with disproportionately sized breasts.

“The stories are all humorous at some point and some of them have been a little more personal, in that you’re talking about something that is probably really embarrassing like sh*tting your pants or whatever,” explained Gephart of the show’s format.

The audience is also invited to share their own tales by anonymously writing them down to be read by one of the performers in between sets.

Gephart herself is a study in comedic dichotomy. Her subtle, perfectly awkward and often dry delivery patiently reveals a love of gross-out humor and big laughs.

Her stand-up style – which Gephart explained began as away to embrace the awkwardness of being a new performer – encourages laughter during silences and punchlines alike. She’s a comedian who could make reading the phone book a funny affair.

Another aspect of Gephart’s duality is found in her disinterest in watching stand-up specials.

“I always make a joke that I actually don’t really care for stand-up,” she said with a laugh. “It’s embarrassing to admit, but I don’t really watch that much stand-up. I’m not caught up with all the specials that everyone is reverent about. I haven’t actually seem them. So, I don’t know why I started doing this.”

Still chuckling, Gephart added, “When I come home I don’t want to watch stand-up on TV. I want to watch ‘Downton Abbey’ or some sh*t like that.”

Gephart first caught the comedy bug while attending college in Madison, Wisconsin, where she was a member of a sketch team. She soon fell in love with performing stand-up and moved to Chicago in 2016. Along with producing Ladylike, she is also a member of The Lincoln Lodge, performs in clubs across the city and has essays published in “Reductress,” “Thought Catalog” and other publications.

Of her many projects, Gephart is currently most excited about a new incarnation of Ladylike in “The Ladylike Podcast,” which began releasing weekly episodes in November 2018.

“I talk to somebody and they tell me a gross story and I ask questions. We read some of the audience clips that I saved from the shows and I play a live story at the end. It’s a podcast that I would listen to if I wasn’t the one making it, so I feel good about that.” 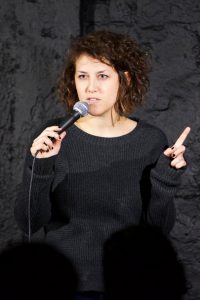 The reason I had the idea for Ladylike is I do really like raunchy, poop humor (laughs). It’s not the most sophisticated answer, but I really do like that stuff. People even look over at me like, “You would like that,” if someone does a really crazy sh*t story [during their set]. I genuinely do like stuff like that. I like dry, kind of raunchy humor.

I also really like Maria Bamford. She’s somebody who’s influenced me.

The first thing I thought of was, I was featured for Tom Thakkar in Bloomington like two summers ago and he has this joke – I don’t even know if he still does it – it might have just been something new he was trying. It’s this joke about Marilyn Manson about the whole taking out the rib mess. He says something like, “I’m going to get two ribs removed so I can suck my own *ss.”

I’m butchering it because he puts it a little more eloquently than that, but that’s a joke that took me by surprise and it’s so silly that I remember it.

I go to a lot of bars (laughs). If my friends are here I try to take them to Weegee’s because on some Thursdays Tom Musick performs. It feels like you’re in an episode of “Twin Peaks.” He stands at the end of the bar and sings jazz standards, like Marlene Dietrich, whatever that type of song is where it’s very melancholy. He sings songs like that and stands at the end of the bar. He has a little spotlight and microphone stand right on the bar and there’s a pianist with him. It’s great. It’s kind of special, I think.

For comedy, the Cole’s Open Mic is a landmark. Sh*thole is an experience that I never had before coming here and also The Lincoln Lodge. There’s a lot of bars that are institutions because they’ve been around so long doing comedy.

I’m obsessed with “Derry Girls” on Netflix. I love that. It’s like naughty teen girls in Northern Ireland in the ’90s. That’s been my favorite show that I’ve seen in a while. It’s also kind of heartfelt. I love “Derry Girls.” Of the comedy that I’ve seen recently, that’s got to be my favorite. It has a really big female cast, so that’s cool, too.

I eat food if I drop it on the ground (laughs).

…I don’t know, I like to think that a lot of my jokes have a feminist message if you dig deep. I try not to hit people over the head with it, but I like to think it’s there.