The history books may remember Jan. 20, 2017, as the date on which Donald. J. Trump took the office of President of the United States, but the not-so-silent majority will always recognize it as the first day of the resistance. All across the country, like-minded folks gathered to laugh the night away – while raising money for the ACLU – at regional editions of the What A Joke Comedy Festival. The Hideout proved to be the perfect Chicago venue in which to enjoy jokes, auctions and some much needed camaraderie after a dark day. 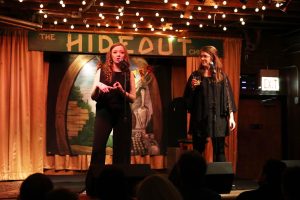 Meredith Kachel and Liz Maupin (right) served as emcees for the event – which they also organized. Ed Yohnka of the ACLU of Illinois informed the crowd of the organization’s continued dedication to fighting for freedom, as well as its ongoing plans to sue the new POTUS. Then Maupin and Kachel helped everyone get the catharsis they needed by leading a deafening chorus of frustrated screams. Once all that primal rage was out of the way, and out in the open, fans were ready for a night of hilarious comedy.

Matty Ryan kicked things off by explaining how this past Nov. 8 represented his worst-ever birthday – and he’s had some bad ones – before sharing his social etiquette tips for strangers and analyzing the questionable appeal of oysters. Up next, Brandi Denise (below) – whose energetic delivery was unique and inviting – used her time on the mic to explain how being a social worker compares to being Oprah and to deliver a Drake-inspired joke that only a woman can tell. 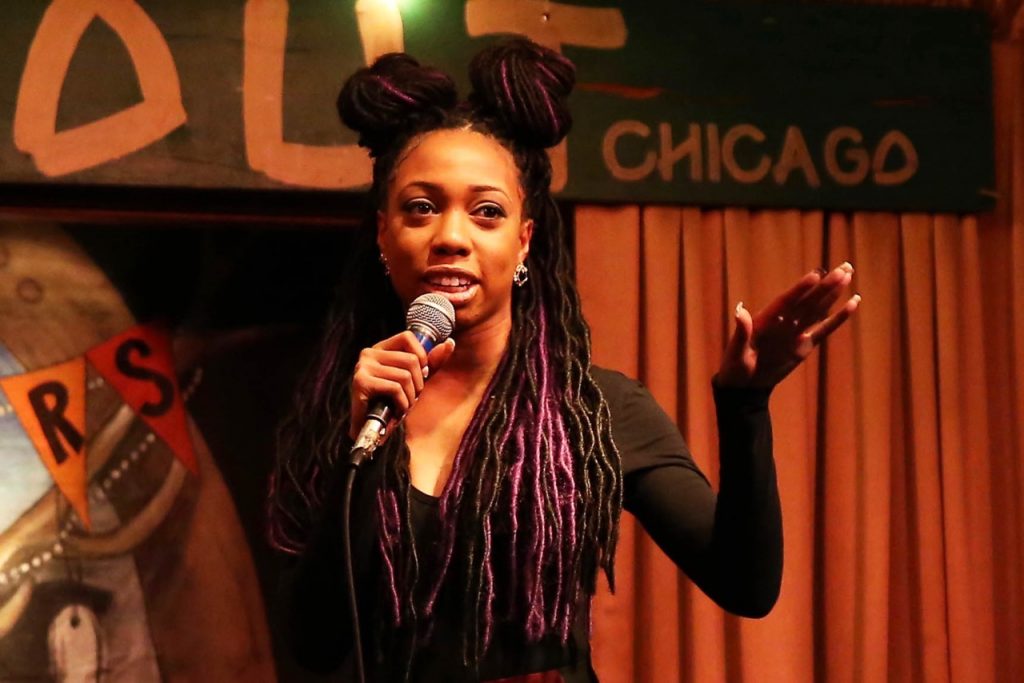 One of the best sets of the night came compliments of Sammy Arechar (right). Many comedians shy away from 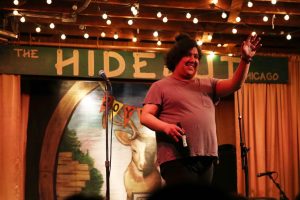 silences, but Arechar leaned into them, expertly using awkward breaks to his advantage. “I think the sun knows what’s going on today,” he said of the gloomy Inauguration Day weather before analyzing the overabundance of root beer offerings currently available on the market. Wordplay, soda-pop culture references and an inventive closing bit – featuring masterful beatboxing – added to the hilarity of his performance. The musical comedy continued with the great Ghouldini leading the sold-out audience in a blood-thirsty protest song sing-a-long.

Later, Calvin Evans owned the stage with his casual charisma, explaining how smartphones are helping eradicate racism before breaking down the anatomy of a hilarious joke about Michael Jackson, Magic Johnson and a young (imaginary) Make A Wish recipient. Headliner Kristen Toomey‘s animated expressions were more than enough to fill the room with laughter, but her incredibly funny tale of her favorite elementary school talent show performer had fans chuckling so hard it hurt.

At the end of the night, Maupin and Kachel returned to the stage to reveal that over $6,000 was raised for the ACLU that night, in Chicago alone, which will be added to the $15,000 that was generated across the country. Follow What a Joke on Facebook to learn more about the nationwide event and head over to ACLU.org to make a donation to help protect your civil liberties.