On Oct. 4, French artist – and soon-to-be superstar – Héloïse Letissier brought her captivating project Christine and the Queens to Chicago’s Vic Theatre. The performance perfectly kicked off her U.S. tour as fans fell deeper and deeper in love as the night went on.

Letissier took the stage silhouetted in a spotlight with her back-up dancers – all clad in black – at her side, giving the crowd a moment to revel in the anticipation. Fans in the front row sang along with every word as she performed songs off Christine and the Queens’ self-titled debut, including “Half Ladies” and “iT.” Confidence in individuality was at the heart of the performance with Letissier condemning the limiting – and damaging – effects of labels. She generated a collective cheer as she declared, “I decided to stop caring at some point,” with a relaxed smile fixed on her lips.

“Tilted” inspired a mid-set dance party on the floor and up on the stage, where Letissier and her dancers performed interpretive moves that would be perfectly at home at The Joffrey Ballet. Starting out purposefully wobbly, Letissier and her dancers poured across the stage as if it were covered in slopes and sudden angles. As the music evolved, so did the dancing, both elements becoming firm, strong and even assertive in the art of self-assurance. 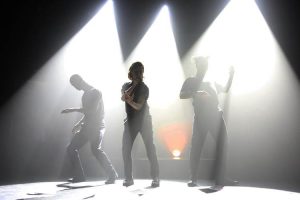 Letissier is clearly her own artist, poised to become the voice of her generation if she wants the job, but she aptly incorporated little nods to the visionaries that came before her throughout the set. Whether it was handing out flowers to fans à la Morrissey or striking Michael Jackson-esque poses while covering Beyonce’s unapologetic “Lemonade” track “Sorry,” these little touches offered fans a deeper glimpse into the musical DNA of Christine and the Queens. Earlier in the set, Letissier also paid homage to Chicago’s own Kanye West with her track “Paradis Perdus,” which features elements of “Heartless” mashed-up with Christophe’s song, “Les paradis perdus.”

The night began with a set from the genre-bending artist KAMAU (left), whose song, “The Icarus” appears on the recently released soundtrack to the 2016 film “The Birth of a Nation.” His connection with the crowd allowed for fun moments of collective music-making from the start of the show until his very last note.

As the concert drew to a close, Christine and the Queens shared a tender moment at the introduction of the song “Saint Claude” and took time out to show appreciation for Chicago fans. “You spoiled me,” Letissier said before joking that now she will feel like she should be “treated like a princess all the time” throughout the rest of the headlining tour. Fans refused to let her leave without an encore, and when she returned to the stage, she rewarded them with a truly special moment – her first-ever on-stage performance of the heartbreaking Terence Trent D’Arby tune, “Sign Your Name.”