Last week I wrote about seeing Alvin Ailey Dance Theater, an experience I found so moving I felt compelled to share it.

This week, I had an experience that was moving (groan) in a different way, and it’s just hilarious enough that I feel compelled, again, to share: I went go-karting. With gays. In the suburbs. On a Thursday night.

A dear friend recently turned 40, and the only direction she gave her partner for the celebrations was that she wanted something “fun and active.” A few Google searches later landed us at Chicago Indoor Racing, a go-karting track in Buffalo Grove, the night before her big day as a surprise.

After a few transit mishaps (why does Metra have so many lines?), we all arrived, and I’m happy to share my findings/tips.

Don’t let the super-scary-at-night office/industrial park that houses the track unnerve you. All of us had the same thought when we turned in: Oh, great, this is totally the beginning of a Law & Order episode. Dun-dun!

Similarly, don’t be turned off by the smell of diesel fuel when you walk into the place. It’s a little Eau de Nascar, but you eventually get used to it.

Yes, those jumpsuits, neck braces and helmets are mandatory. But if you shoot the pictures right, you can later claim you were on a Space Shuttle. 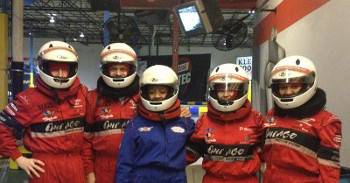 If your friends are as snarky as mine are (and I certainly hope that they are), shush them for long enough during the nine-minute safety video that you have some vague idea of what’s going on when you get to the track. What do those flags mean? Can we start now? Should we not hit the brake and the accelerator at the same time? I still have no idea.

Defense is the best offense. If you, like me, turn out to be more Trixie than Speed Racer (smart but not so fast), the best you can hope for is to keep your opponents from passing you rather than actually passing anyone yourself. My strategy involved meandering my kart back and forth across the track like a boozy hovercraft.

And no, they don’t let you drink before you drive.

I’m glad I can now check “go-karting” off my bucket list (OK, it wasn’t really on there), and my friend has birthday memories I can’t imagine she’ll ever forget.