If you’ve seen Madonna or Gloria Estefan perform live or caught episodes of “Dancing with the Stars” or the American Music Awards on TV, chances are you’ve witnessed the dance direction of Liz Imperio. Dubbed the “choreographer to the stars,” Imperio has a track record for fostering talent. She introduced her career enhancement program “Breaking Barriers” for aspiring dancers in 2009 and received the Industry Dance Award’s role model honor in 2016. 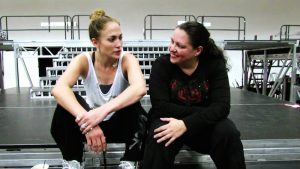 Jennifer Lopez and Liz Imperio during a rehearsal for the “Dance Again” world tour.

Jennifer Lopez has worked with Imperio since her first concert and, while preparing for her 2012 “Dance Again” world tour, she said the Cuban-American dance instructor “was one of the first people I wanted to call because the Latin element in my show is such a big part…and I don’t think there’s anybody out there that does that [like Imperio].”

Today, Imperio is collaborating with Giordano Dance Chicago (GDC) on her World Premiere “Lost in this World” slated to debut at the Harris Theater for Music and Dance from March 31 to April 1. The piece is part of GDC’s spring engagement program, which also features “Grusin Suite” restaged by River North Dance Chicago Artistic Director Frank Chaves.

“Many Chicagoans know Frank’s ‘Grusin Suite’ as a four-movement work that was part of River North Dance Chicago’s repertoire, but it was originally choreographed and debuted on the Skyline Stage as a three-movement work for our Jazz Dance World Festival in 1993,” explains GDC Artistic Director Nan Giordano. “I’m very excited to see Frank, a former GDC dancer, give new life to this piece of our history.

“I’m also thrilled to welcome back Liz Imperio, who choreographed ‘La Belleza de Cuba,’ a full-bodied tribute to the jazz of Cuba’s streets and nightclubs, for our 50th Anniversary,” continues Giordano. “Imperio, too, represents our legacy, having initially connected to my father, Gus, whom she has described as the ‘iconic godfather of jazz dance,’ at a dance convention many years ago. Given her appreciation of our history and sense of heart, I can’t wait to share her newest full company work with our audiences this spring.”

Following the performance on April 1, patrons may support GDC and its outreach programs by attending the company’s gala celebration after party where, according to Giordano, “We will be taking this opportunity to recognize GDC dancer Maeghan McHale, named one of Dance Magazine’s ‘Top 25 to Watch’ in 2010, as she celebrates 10 years in the main company.”