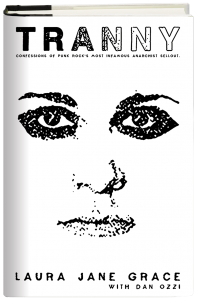 Laura Jane Grace, frontwoman of the punk band Against Me!, publicly came out as transgender in 2012. Most of her new memoir, “Tranny: Confessions of Punk Rock’s Most Infamous Anarchist Sellout,” chronicles her life leading up to her transition. Grace will be reading from her book on Friday, Dec. 2 at 7 p.m. at the Wilson Abbey.

The book depicts how her journey into the punk scene was influenced by her gender dysphoria. For more than 30 years, she says she kept it a secret from everyone, and it festered in her, causing all sorts of issues: drug abuse, toxic relationships and self-isolation. “Tranny” is an honest and brutal testament to what happens when you live in a cloud of self-hate — thus, the title.

Prior to the book’s November release, Grace wrote a piece for VICE about its provocative title. She explains what she will say to her daughter about it:

Evelyn, there is this word, “tranny,” and it’s worse than any curse word you can say to some people, worse than “fuck” or “shit.” But darling, you also have to understand that some people—people I am even friends with and whom I love dearly—say the world freely and even in reference to themselves and they don’t have any problem with it, and that’s totally okay for them to do and there’s nothing wrong with it.

Grace’s reclaiming of a word that has been and will continue to be used to hurt her mirrors so much of her story. When she decided to transition, she had 32 years of life that were affected by both her own and society’s toxic relationship with being transgendered. And these years don’t just go away. We all know this, right? When we heal, there are often scars and bad memories that we continue to live with. But we can somehow embrace them, loving our history, because it’s a part of us.

Beyond the memoir, we all have access to an important part of Grace’s history: her music, and I believe it’s there, in her music, where her pain has meaning.

The best art is almost always bittersweet, because it comes from our soft spots. It’s the fruit of toil. Grace’s pain allows fans to feel their own. Same with her anger, but also her strength. Her resistance. When Grace was hiding her gender dysphoria from the world, she created music that moved people.

We need punk music right now, its ethos Grace both praises and critiques throughout the book. We need rage, and the desire to rebel, and communities rooted in dissent. We need this energy to motivate us to both change what needs to be changed (a broken political system, systemic racism and misogyny). But we also need strength to accept what needs to be accepted (scarred pieces of our own identities). I recommend “Tranny” because it speaks so loudly that pain can be redeemed, and strength, beauty, art and love can be found amid brokenness.