When it came time to plan this year’s comedy lineup for Chicago’s Tomorrow Never Knows Festival, The Hideout co-owner Tim Tuten said that the idea to book all women comedians came about because the event would take place so close to the inauguration of what should have been the first female president of the United States. While the election may not have gone as planned, the comedy of TNK Fest transcended expectations during Michelle Wolf‘s hilarious sold-out 7 p.m. show on Jan. 13. 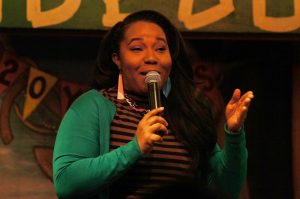 Following the brief introduction from Tuten – who shared information about some of the venue’s upcoming events, including Grammy nominee Robbie Fulks’ Monday night residency and the weekly Sanctuary Soup dinners – Chicago comedian Rebecca O’Neal (right) warmed things up with a hilarious 15-minute set. The “Chicago’s One Night Stand-Up” host shared her favorite Planned Parenthood story, her experiences as a bike messenger and her boundless love for Michelle Obama. “Get you some cardigans and find you a man,” she said, joking that the First Lady’s impeccable sense of style inspired the comedian’s current wardrobe choices and relationship goals. Online dating, creepy Tinder messages, and men who have an aversion to seeing public breast-feeding also proved to be hilarious sources of jokes from O’Neal.

When Wolf started her set, she immediately took aim at the big orange elephant in the room, joking that perhaps the inauguration set-up staff in Washington D.C. could benefit from being a little more lax in checking all the details this year – insinuating that maybe all stage collapses aren’t necessarily a bad thing. Later, she had The Hideout in hysterics as she revealed why Hillary Clinton’s perceived b*tchyness was at once her greatest asset as well as her Achilles heel.

Wolf’s take on blogs, babies and the importance of deflating the next generation’s self image a bit – because “ugly people get sh*t done” – demonstrated her uncanny ability to weave hilarious, punched-up jokes into the context of really funny, all-encompassing stories. Her questioning-style of delivery eased everyone into her world from the moment she stepped onto the stage, while her emphasis on specific phrases summoned laughs (seemingly) out of thin air. For example, simply hearing Wolf utter the phrase “nice lady,” which she used to describe Bill Clinton’s former fling Monica Lewinsky, was unbelievably funny thanks to her subtle emphasis and sincere belief in the definition of the term.

Celebrity scandals, from the likes of the Kardashians and Bill Cosby, inspired creative comedy routines from the mind of Wolf, but perhaps the funniest moments of the night came compliments of her detailed description of what it feels like to be a woman on her period and the healing power of a blanket. The show came to an end with Wolf sharing a real-life – completely bananas – text exchange that she had with a would-be-suitor, which had the entire audience bowled over with laughter.

Comedy at The Hideout continued throughout TNK Fest with Phoebe Robinson performing a pair of sold-out sets on Jan. 14 and Beth Stelling closing things out on Jan. 15. Tickets for the remaining Tomorrow Never Knows shows can be purchased at TNKFest.com.