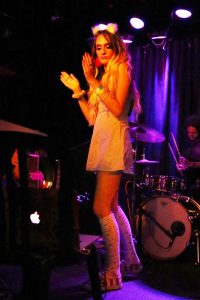 Thanksgiving can be a stressful time of year, especially after a contentious election season. Luckily, this Black Wednesday (Nov. 23) offered Chicagoans a rock respite as Sad13 – the new project from Speedy Ortiz’s Sadie Dupuis – curated an engaging evening full of great music and even better conversation at the Beat Kitchen.

The show started off with a de-escalation and bystander intervention workshop, presented by Jes Skolnik. Fans and musicians alike sat in the round engaging in a candid conversation about how to deal with potentially violent, discriminatory and/or dangerous situations in a helpful way.

When witnessing a troubling scene, the first reaction for many people is to freeze or stay silent, so Skolnik shared some techniques that they have used – including stating a confident “No,” using what they refer to as assertive ignoring and matching someone’s energy in order to help bring them down – in dealing with encounters with strangers, co-workers, friends and family members. Skolnik also provided those in attendance with an information-filled pamphlet for further reference, as well as links to additional resources.

When it came time to begin the musical portion of the evening, Chicago’s own Spooky Action Space Captain delivered a noisy art rock set full of intricate jams, unique tunings and unexpected time changes. “Bob’s Burgers” references and memories of Trix Yogurt were among the topics on which the band waxed poetic as guitarists/vocalists TJ Kallaher and Karla Bernasconi tweaked their tuning. 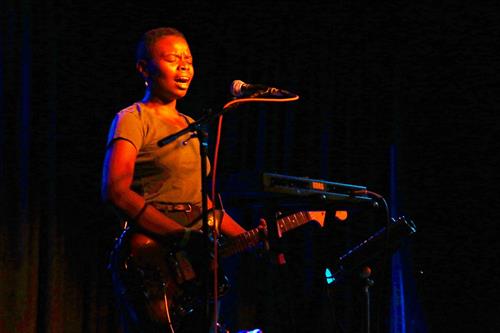 Lætitia Tamko, stage name Vagabon (left), stated that she was sick near the end of her Beat Kitchen set, but until that point, no one suspected that she was anything less than 100 percent. Her expressive, powerful vocals textured her personal, poetic lyrics with nuanced techniques that could bring a tear to your eye. Tracks like “Fear & Force” found Tamko tapping into her network of Shakespearean emotions, all the while strumming with an exposed sincerity that cut right to the heart of the composition.

Sad13’s performance was comprised of tracks off the artist’s debut solo release, “Slugger.”

“These are pop songs, and I tried to make them fun. But they’re about the things that matter most to me in the world: inclusivity, representation, consent, respect, diversity, self-love and care, community support and surviving trauma together,” Dupuis said on social media when the album dropped on Nov. 11. During her headlining set at the Beat Kitchen, the songs’ individual messages of positivity were amplified by her intoxicating pop melodies and at times ferocious arrangements – most notably on a heart-thumping rendition of “Line Up.” “Just a Friend,” “Get a Yes” and Dupuis’ impromptu anti-Thanksgiving speech, during which she called the day an “embarrassing holiday” were also high points of the performance.

“Slugger” is currently available on Bandcamp and as a limited edition buttercup vinyl. Sad13 will continue to tour across the U.S. throughout the fall until Dupuis wraps things up on Dec. 13 in Cambridge, Mass. Follow Sad13 on Facebook to stay up-to-date on music news and additional performances.