“Updates have become infrequent, and generally impersonal. Clearly, there’s not enough fucked-up shit in my life to write about these days. And who wants to read ill-informed political rants?” –-Aaron Hawkins, Uppity-Negro 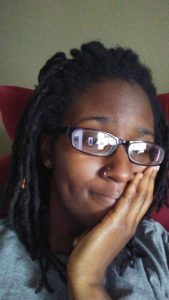 so first, a confession:

at Final Stage at Brave New Voices in July, I had an emotional breakdown in the audience, the type of crying fit usually reserved for church pews and Sunday mornings. and maybe it was the chorus of Ultralight Beam filling the high ceilings of the Kennedy Center; or that after a summer of coaching a youth poetry team mostly alone for the first time, all I had to do now was get six teenage girls home safely; or that four months earlier, I’d been laid off from the best paying job I’d ever had in a field I was excited about, but I felt safe and able enough to wail.

the show ended, the crowd rose to file out and I stayed seated, feeling emotionally overloaded but freed after a week of words, performances and bold protests by this nation’s youth. I instinctively stood with everyone, but was anchored to the floor by sadness and grief I’ve holding onto for months. my co-coach ushered our team toward the after-party, and I cried. a few tears led to full-on sobs. I don’t know if anyone saw me or rather, I’m not sure if anyone really understood what was happening enough to make sure I was ok. there was a lot of that concerned-and-afraid eye contact, but most kept it moving. by this time, I’d already decided that I was just gonna ugly cry out my frustrations and fears and swallowed realities over my life effectively falling apart with no plan to put it back together.

luckily, when I got to the hyperventilating-knees-weak-I-can-barely-breathe portion of this public healing, a friend literally ran to catch me before I fell.

I tell this story because I get a lot of messages from folks inspired by me and an ‘openness’ to share my struggles with bipolar disorder, the irregular regularity of my moods and the different obstacles I face and sometimes conquer. and every time, I can only think about the things I never say. partially because I remember when folks didn’t think social media would last long enough to drastically shift culture but here we are, 24-hour Twitter cycle and more ‘woke’ for the wear,’ though not necessarily better. as someone who has boundary issues in communication, I’m not ever sure of what line to cross so I avoid them all.

the struggles I’ve shared online are nothing compared to what I’ve read from other writers who’ve lived decades with mental illness. I was diagnosed just five years ago. bipolar disorder had no problem integrating into my life, but I haven’t been able to get used to it.

columns afford the opportunity to talk about a breadth of subjects, from Nate Parker and the legion of rape apologists to Ryan Lochte, latest white boy to take their privilege international, but truthfully, all I’ve been digesting is my own sanity, and the ways in which it lives inside and out of popular culture.

sidenote: stop using ‘crazy’ as an adjective because you don’t have a vocabulary or the patience to think of the word you really want. it’s lazy and insensitive and triggering. here’s some alts to try – ridiculous, unbelievable, incredible (depending on the context). quit peppering that word into conversations like adverbs aren’t a thing. and sorry Beyonce, looking crazy is worse than looking jealous because looking crazy gets you killed.

as a bipolar writer, I have trouble focusing my mind on one topic, especially when my mania can’t stop processing my own symptoms and habits. a few minutes of deep thought and I’m unlocking repressed memories when I’m supposed to be writing about America’s inability to internalize its own history. talk about a momentum shift.

we never talk about mania because it looks enticing from the outside. my mania is productive as fuck. mania is how I got through a summer of poetry events where I coached and/or competed in slams that had me traveling every other week. it wasn’t until recently that I realized the two coincided. our inability to talk about it, though, means that we suffer in silence.

I overextended myself and it probably won’t be the last time; I got some lofty ass goals, one of which is being even more transparent. I just need the space to be.

(‘Hero’ Artwork by Samax Amen. The line is from a poem called ‘auntie and me,’ published in “Blues Arrival: Stories of the Queer Black South Migration.” Post-depression cycle selfie since I’m afraid to share a picture of what my mania looks like because I think you’ll like it too much.)