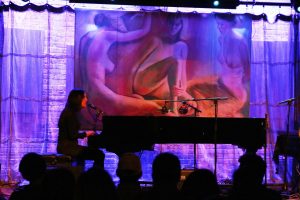 Vanessa Carlton is a sincere songwriter – it’s one of the primary reasons fans perpetually gravitate towards her with each beautiful album – and with lyrics that are steeped in poetry, her firsthand experiences often get overshadowed by the greater human emotions that she taps into. Her live shows give her the chance to share the personal inspirations behind the music – while connecting with fans on a deeper level – and that’s exactly what she did when she took the stage at Space in Evanston on Feb. 25.

“We’re just gonna let this first ship go. Just let her sail,” she said at the top of her set before playing the delicate piano riff of her 2002 mega-hit, “A Thousand Miles.” Cellphones instantly raised into the air as fans rushed to capture the memory of the song that first introduced them to Carlton as the lead single of her debut album,
“Be Not Nobody.” After a brief intro of Tom Petty’s “Learning to Fly,” she seamlessly transitioned to the “Rabbits on the Run” opener, “Carousel.” She later explained that the 2011 release marked the beginning of her life as she had shed the burden of working with a major record label.

Carlton made the night about the art, from her passionate rendition of “White Houses” – which she revealed to be a quasi ode to dorm life – to the
“Liberman” tune “Willows” – which she dedicated to her mother and the home she made for her family – to displaying a painting her grandfather created as a backdrop to the performance. But she also took time out to promote positivity in the modern age and encourage political involvement. “This has become a rather topical song,” she said as a prelude to “Who’s To Say,” adding, “this is for everyone in the LGBT community.”

Violinist Skye Steele – who accompanied Carlton throughout the performance with enchanting arpeggios and gorgeous phrases – offered an easy and effective way to voice opposition to the policies of the current administration by providing pre-stamped, pre-addressed postcards for fans to write a message to their congressmen. He even posted a few prompts and talking points for added inspiration for those at a loss for words. 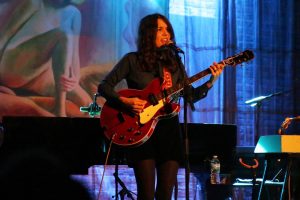 As the night drew to a close, Carlton thanked the show’s opener Tristen, who performed a bewitching set of haunting songs – fueled by love and loss – from her first two albums,
“Charlatans At The Garden Gate” and “C A V E S,” as well as tracks from her upcoming LP due out this summer.

“I Don’t Want to Be a Bride” proved to be the perfect finale as Carlton’s layered vocals – which were recorded live by Steele and his complicated pedal collection – engulfed the intimate venue allowing her to step out from behind the piano for the first time to lead the audience in a collective rhythmic experience.

Carlton will continue to tour across North America through April 15 when she wraps up with a performance at The Coach House in San Juan Capistrano, CA. Head over to VanessaCarlton.com for more information.