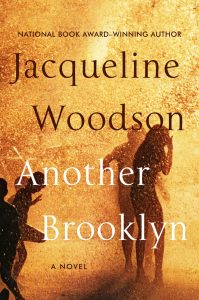 “Another Brooklyn,” Jacqueline Woodson’s first novel for adults in more than 20 years, is for those who know (or want to know) what it’s like to grow up as a girl and cope with loss at the same time your changing body is thrusting you into a new world — adulthood.

Maybe you lost a loved one, or a home, or maybe your innocence. The narrator’s childhood, which she relives throughout the novel, is filled with loss: the loss of home, family, security and roots. The novel follows August, an anthropologist in her 30s, as she returns back to Brooklyn, her childhood home, to bury her father.

Woodson will be reading from her novel at Women and Children First at 7 p.m. on Wed., Oct. 19. She has written more than 30 books, most of them for children and young adults.

“Another Brooklyn” is a verse novel — a story told in short poetic fragments that mimic memory. Memory does not add up to a full narrative — there are gaps, and in those gaps we find mystery and longing. Memory is a collage of moments, emotions, and the meaning we put into them over time.

We know what August knows: that when she was eight, she moved with her father and younger brother from their home in Tennessee to Brooklyn. We do not know, because August didn’t know or could not accept, the fate of her mother. And we know in Brooklyn, August found a new sense of home and security within the fierce friendships of three other girls. August, Sylvia, Gigi, and Angela shared “the weight of growing up Girl in Brooklyn, as though it was a bag of stones we passed among ourselves saying, Here. Help me carry this.”

Together, the four girls felt stronger:

When [boys] hollered, Conceited, we said No. Convinced. We watched them dip-walk away, too young to know how to respond. The four of us together weren’t something they understood. They understood girls alone, folding their arms across their breasts, praying for invisibility.

But they knew to fear the city:

We pretended to believe we could unlock arms and walk the streets alone. But we knew we were lying. There were men inside darkened hallways, around street corners, behind draped windows, waiting to grab us, feel us, unzip their pants to offer us a glimpse.

As much as this book is about August, it’s also about the tumultuous and dangerous Brooklyn of the Seventies, where women’s bodies are found in the park, riots happen outside your bedroom window, and your neighbor might be a prostitute just trying to hold on to her kids. It reminded me of a grittier “A Tree Grows in Brooklyn”:  there is beauty amidst poverty and violence, and for every dream thwarted, a new dream sprouts.

As an adult, August finds much to life beyond Brooklyn and her youthful ideas of life. But she has to come back to Brooklyn to recognize that as much as her memory is fragmented, she herself is whole.